Observations using the Gemini Multi-Object Spectrograph on Gemini South reveal that galaxy-wide high-velocity outflows are extremely common among galaxies that host luminous quasars. These outflows may represent a crucial stage in a galaxy’s evolution when the supermassive black hole at its center begins injecting vast amounts of mass and energy into the galaxy.

Supermassive black holes reside at the center of all massive galaxies and they grow through mass accretion, taking on material from their surroundings. During the most active periods they become luminous quasars. The most successful models of galaxy evolution predict that quasars play an integral role in the formation and evolution of massive galaxies by injecting mass and energy into their host galaxies. Without such feedback mechanisms, models are unable to accurately reproduce the properties of local massive galaxies such as the distributions of colors, star formation rates and stellar masses.

A popular idea for a feedback mechanism is that extremely powerful and high-velocity outflows of gas are launched by quasars and consequently propagate throughout the galaxy (see Figure 1). These outflows could sweep up and heat material, reducing the star formation rates of the host galaxies and add material to the larger scale environment. While earlier observations have shown that high-velocity outflows exist in some quasars, it has remained unclear what the spatial extent of these outflows are and how often they occur.

Using the Gemini Multi-Object Spectrograph (GMOS) on Gemini South, astronomers at Durham University, led by Chris Harrison, have begun to answer these questions and show the properties and frequency of outflows in quasars. Using GMOS’s integral field spectrograph, they traced the properties of the gas across the host galaxies of 16 quasars. Critically, GMOS on Gemini South enabled the astronomers to trace the velocity of the gas over the full spatial extent of the quasars’ host galaxies. By using emission lines produced by ionized hydrogen and oxygen to trace the gas velocities the observations revealed that outflows, reaching velocities of >1000 kilometers/second, were found over the full spatial extent of the host galaxies of all of the quasars observed (e.g., see Figure 2). Estimates of the masses involved in these outflows indicate that they are removing significant amounts of gas from the galaxies and their overall properties are in line with model predictions.

A key aspect of this work is the quasars that were observed with GMOS were initially selected from a parent sample of several thousand objects with optical spectra (Figure 3). These observations can thus be placed in the context of the overall population and reveal properties of quasars generally. For example, these observations imply that at least 70% of the most luminous quasars (those predicted by models to drive the feedback mechanisms) exhibit galaxy-wide outflows of this type. Further work now needs to be done to pin-down exactly how the central black holes are able to launch such large-scale outflows. Furthermore, while models predict that outflows, such as those observed here, have a dramatic impact upon the star formation in their host galaxies the current observational evidence for these effects remains only indirect. Astronomers continue to search for direct observational proof that these outflows can have a profound influence the evolution of massive galaxies.

This research is presented in the paper: Kiloparsec-scale outflows are prevalent among luminous AGN: outflows and feedback in the context of the overall AGN population by C. M. Harrison, D. M. Alexander, J. R. Mullaney and A. M. Swinbank. The paper is published in the Monthly Notices of the Royal Astronomical Society (2014 441 3306) and is available on astro-ph. 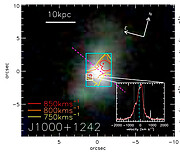 PR Image geminiann14005b
An example object from the GMOS observations