Observations using the Gemini Near-Infrared Imager (GNIRS) at the Gemini North telescope have confirmed one of the lowest mass free-floating planet known, perhaps the very lowest.

The discovery team, led by the University of Hawaii’s Michael Liu, discovered this reddest known field dwarf using the Pan-STARSSS1 survey telescope on Maui’s Haleakala. The team's follow-up observations on Gemini were made over three nights in late June and early July of this year. From the Gemini (and other observations) the object, known as PSO J318.5-22, appears to have a mass only six times that of Jupiter and likely formed about 12 million years ago at a neighborly distance of about 80 light-years away.

In a UH Institute for Astronomy (IfA) press release issued on October 9, 2013, Liu is quoted: "We have never before seen an object free-floating in space that looks like this. It has all the characteristics of young planets found around other stars, but it is drifting out there all alone.“ Liu continues, “I had often wondered if such solitary objects exist, and now we know they do.”

In addition to Gemini spectroscopic observations, the Canada-France-Hawaii and NASA Infrared telescopes provided critical data for the work. The research is described in a paper recently accepted for publication. 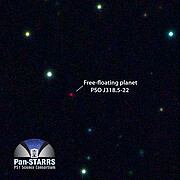