The Gemini Planet Imager (GPI), Gemini’s next-generation instrument for characterizing new worlds, has seen a frenzy of activity over the past month.

In late July the instrument’s cryogenics were warmed up, the instrument’s primary components parsed into shippable pieces (geminiann13011a), and seemingly overnight the instrument arrived at Gemini South (geminiann13011b). “For the past 2.5 years GPI has called the labs at the University of California Santa Cruz home,” said Stephen Goodsell, who manages the project for Gemini. “Now, the fun begins as GPI arrives home and, before the end of this year, gets mounted on the back of the Gemini South telescope and collects light, from real planets!”

However, before that can happen the instrument needs to be fully tested and integrated on the Gemini South telescope in Chile.

Currently, the instrument is fully assembled in the Gemini South instrument lab on Cerro Pachón in Chile (geminiann13011c). According to the team, since arriving in at Gemini South, GPI milestones include:

Now, testing and integration begins, and the team reports that the instrument's computers are operational, software integration is underway, and most mechanisms have been tested, including the deformable mirrors. Of note, the Integral Field Spectrograph is currently under vacuum and is cooling, as this web-feature is published, the team expects to reach its operating temperature by the 13th September.

Between now and November GPI will undergo extremely thorough testing at the Gemini South instrument lab and is scheduled to be mounted on the telescope in late November. On-sky testing will then commence leading to early science observations with the instrument during the first half of 2014. These first science observations are to be selected through an open call to the community during the 2014A semester.

Congratulations to the entire GPI team shown in geminiann13011d. 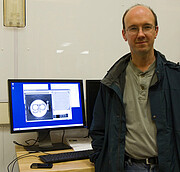