Things happened quickly on the night of April 26-27 at the Gemini North control room on Mauna Kea. At 10:45 p.m. an alert arrived for what would later be described in a NASA press release as a “shockingly bright” gamma-ray burst (GRB). Using Gemini’s rapid response Target of Opportunity protocols, the team quickly obtained the first ground-based optical spectrum of the high-energy event.

Captured within 90 minutes of detection by both Fermi’s Gamma-ray Burst Monitor (GBM) and NASA’s Swift satellite, Gemini’s spectrum of the GRB’s afterglow surrendered a critical parameter: its distance; the object lies only about 3.6 billion light-years away, which is nearby for a GRB event.

Michael Hoenig, who was executing observations with Gemini that night, slewed the telescope to the target almost immediately. “We pretty much dropped everything we were doing at that point,” Hoenig says, “Time is of the essence with GRBs!”

Intense flashes of gamma radiation from powerful stellar explosions, GRBs are usually denizens of the distant universe and therefore appear relatively faint from Earth. So scientists were surprised to detect this uncommonly bright source of high-energy light, which has been dubbed GRB 130427A, based on its discovery date.

“I figured that a GRB this bright had to be exceptionally close to Earth (by GRB standards),” says Daniel Perley, a team member from the California Institute of Technology who worked closely with the Gemini observers on Mauna Kea that night. “But the only way to know for sure would be to get a spectrum. Gemini's capabilities in this regard were invaluable –– being able to immediately trigger a Target of Opportunity observation on an optical spectrograph, even during full Moon, was critical. Gemini didn't disappoint.”

Generally, a few weeks after astronomers detect a nearby GRB, they spot a fading supernova where the GRB once glowed, linking the two events. Now the search is on for that supernova, though nothing can be done until the GRB afterglow itself fades away.“ Even after two weeks of continuous fading the afterglow remains bright enough to outshine any standard supernova,” Perley remarks.

“Studying the GRB’s afterglow –– and the associated supernova, when (and if!) it emerges –– in the kind of detail that only these nearby events can afford, will be invaluable for understanding exactly what kind of event produces these gamma-ray bursts and their intense radiation,” Perley says. Future Gemini follow-up observations are currently planned, but pending verification that the supernova has appeared.

Astronomers believe the majority of GRBs form when a massive star collapses into a black hole, expelling jets of matter outward at nearly the speed of light, which we see as a powerful burst of previously unseen energy. 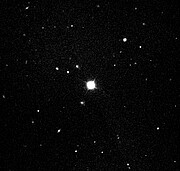