Gemini Near-Infrared Spectrograph (GNIRS) observations lead to surprising results on the nature of Type Ia supernovae (SNe Ia). Time-series near-infrared spectra of SN 2011fe hint that more SNe Ia harbor unprocessed carbon than previously believed, and what we thought was the main driver of the luminosity-decline rate Phillips relation may not be correct.

Understanding the true nature of Type Ia supernovae (SNe Ia) is a linchpin of contemporary cosmology. Specifically, these explosions are critical for tracking the expansion history and acceleration of our universe. Commonly called “dark energy,” the discovery of this universal acceleration was the basis for the 2011 Nobel Prize in Physics.

Now, researchers using the Gemini Near-Infrared Spectrograph (GNIRS), at the Gemini North telescope on Hawaii’s Mauna Kea, have taken a major leap forward in understanding SNe Ia with the first detection of unprocessed carbon in near-infrared spectra of a normal Type Ia supernova. The supernova (geminiann13004a), denoted SN 2011fe, was discovered by the Palomar Transient Factory (PTF) within hours of its explosion on August 24, 2011 in the nearby galaxy Messier 101, located about 21 million light years away and a popular target for amateur astronomers.

Carnegie Supernova Project postdoc Eric Hsiao reports that these near-infrared observations (a month-long time series consisting of nine spectra with GNIRS and one with SpeX on NASA’s Infrared Telescope Facility), “…provide an ideal baseline to compare with other objects,” and adds that, “Previous studies have detected carbon in optical spectra, but in this work we were able to detect it for the first time in the infrared and capture its time evolution.” Hsiao, at Las Campanas Observatory in Chile, also worked with Howie Marion, a post-doc researcher the Harvard-Smithsonian Center for Astrophysics (CfA) in Cambridge Mass., and Mark Phillips the Associate Director of Las Campanas Observatory and team leader for the Carnegie Supernova Project. The work is accepted for publication in an upcoming issue of The Astrophysical Journal.

Prior to this finding, the supernova community relied on very early optical spectra for the study of unprocessed carbon, leftover from the progenitor white dwarf. With this work, the team shows that the near infrared is a better wavelength region to survey this unprocessed material. There are hints that the number of SNe Ia harboring unprocessed carbon may have been grossly underestimated from previous studies in the optical, a result that would have profound impact on our understanding of these explosions.

The team’s observations also confirmed the long-standing prediction that magnesium, a marker for the boundary between carbon and oxygen burning, would decrease rapidly in velocity and then settle into a constant velocity as SNe Ia evolve (geminiann13004b). The variation in the location of the carbon/oxygen burning boundary between supernovae is believed to be the main driver of the Phillips relation. While a large range of magnesium velocities was found, there was surprisingly no correlation with the supernovae’s peak luminosities. The team acknowledges that more work needs to be done to understand this unexpected finding.

The following details are provided for readers desiring more details of a technical nature.

A key ingredient to realizing the full potential of near-infrared SN Ia cosmology is near-infrared spectroscopy, such that the peak luminosities can be accurately converted to the rest frame. With the limited size of the world’s current sample, the time evolution and the diversity of the near-infrared spectral features are poorly understood. These uncertainties directly affect the determination of the peak luminosity. To improve our knowledge of this relatively unexplored wavelength region, the Carnegie Supernova Project and the CfA Supernova Group have embarked on a joint program to obtain a statistically significant sample of near-infrared spectroscopic observations.

Using high quality GNIRS spectra and a more sophisticated spectrum modeling technique, Hsiao et al. were able to detect carbon, a first in the near-infrared wavelengths for a normal SN Ia. geminiann13004c, shows the comparison between observed and model spectra. The near-infrared carbon line studied is relatively isolated and ideally located between two magnesium lines. The team’s model spectra shows that the presence of carbon is required to produce the observed “flattened” profile near 1.03 micron.

Furthermore, the time-series GNIRS observations indicate that the influence of carbon increases with time (geminiann13004). The carbon line in the optical, on the other hand, usually disappears very early, requiring that the supernova be discovered at a very young age. The team proposes that the delay in the onset of the near-infrared carbon feature can be explained simply by the change in the ionization condition. As the supernova ejecta expands, the temperature decreases. The optical carbon line in its first ionized state then gradually recombines into neutral carbon which forms the ever stronger neutral carbon feature in the near-infrared. Due to this fortuitous delay in its appearance, the near-infrared neutral carbon feature is potentially a superior probe of unprocessed material to the more commonly used optical feature. 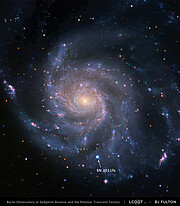 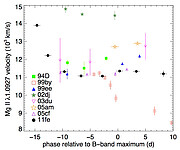 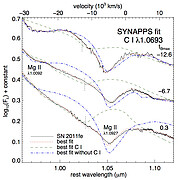