“Green-bean Galaxies” and the Demise of Quasars

Using joint observations from Gemini South, the European Southern Observatory’s Very Large Telescope (ESO/VLT), and the Canada-France-Hawaii Telescope (CFHT), a team of astronomers has discovered a spectacular and very rare phenomenon in galaxies. It is interpreted as a light echo from an earlier, very active, quasar phase that has since shut down. Because of these objects' unique characteristics, they appear green in some datasets giving them the colorful moniker “green-bean galaxies.”

After investigating the new object with the VLT, and confirming it with Gemini South, Schirmer and his team went on to observe several additional candidates with the Gemini telescope. These spectroscopic observations confirmed that another 16 candidates share the same characteristics as J2240, and Schirmer verified their cosmological distances with the Gemini data. These galaxies are exceedingly rare. Only one such galaxy is expected in a square cube with sides 1.3 billion light-years across.

Quasar light echoes have been known for a few years, but only within our nearer cosmic neighborhood and with much lower luminosity. The 16 new, high-luminosity, objects now identified with Gemini-South will allow astronomers, for the first time, to directly determine how individual quasars have shut down over timescales much longer than a human lifetime. These results open up a new window in the study of how supermassive black holes in the cores of galaxies might have gained their mass, and how quickly that process can come to a halt.

These results open up a new window in the study of how supermassive black holes in the cores of galaxies might have gained their mass, and how quickly that process can come to a halt.

One of the most significant astronomical discoveries in the last decade is the realization that almost every massive galaxy harbors a supermassive black hole (SMBH) at its center. SMBHs gain millions to billions times the mass of the Sun by accreting material from their immediate surroundings. The matter is forced into a rotating accretion disk around the black hole. As the matter spirals down onto the black hole, it reaches temperatures of millions of degrees, generating large amounts of X-rays in the process. The intensity of these X-rays tells us how active a SMBH currently is. Part of the X-ray radiation is absorbed by dust in the immediate vicinity of the black hole. Consequently, the dust heats up and re-emits the energy absorbed at thermal mid-infrared wavelengths, from which astronomers can also infer the SMBH's current activity level. The most active of these galaxies are known as quasars.

The remainder of the X-ray radiation escaping from the galactic centers ionizes the interstellar gas in the host galaxies. This can be seen in the galaxies' spectra by extended emission of double ionized oxygen, [OIII]. Usually, these so-called narrow-line regions (NLRs) have an extent of 1000-10,000 light-years, i.e. 1-10 percent of the diameter of a typical galaxy. Their luminosity correlates well with the X-ray luminosity of the SMBHs. Today, the centers of most galaxies are largely quiescent, but the presence of a SMBH shows that in their past they must have undergone a very active phase.

In this new class of “green-bean galaxies,” [OIII] luminosities rival those of the brightest quasars known but astronomers haven’t observed a quasar at the centers of these galaxies. Therefore, either the quasars radiation is absorbed by large amounts of dust, or they have been shutting down in the very recent past –– so recent, in fact, that the lower X-ray flux hasn't yet reached the farther regions of the NLR. In the latter scenario one would observe a light echo, in which the ionized gas further from the nucleus still reflects the earlier, more active quasar state.

Since mid-infrared photons aren’t affected by dust obscuration it reveals that the [OIII] emission in these galaxies is indeed 5-50 times higher than expected, confirming the light echo. While active galaxies are known to change their luminosity on hours to decades timescales, and by 10 percent up to a factor of 10, respectively, time scales longer than about two decades have not been studied previously. Accretion models predict that the luminosity of the central SMBH engine can drop by factors of 10,000 over some 100,000 years. 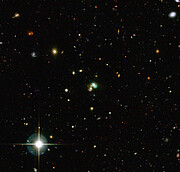