The Best Standard Candle for Cosmology

Exploding stars (supernovae) offer the most precise measurements of large cosmic distances. Of these, when observed at near-infrared wavelengths, type Ia supernovae provide the greatest precision as “standard candles” for measuring cosmological distances.

Observations of type Ia supernovae at optical wavelengths are frequently used for this purpose and are the basis for the research leading to the 2011 Nobel Prize in Physics. These supernovae have intrinsically variable luminosities at optical wavelengths, however, so the luminosities must be standardized empirically. For example, this can be accomplished by using the relationship that supernovae which fade away more slowly are brighter. Optical light also suffers from the complication of attenuation by dust anywhere along the line of sight, from the supernova’s host galaxy to our vantage point in the Milky Way.

To circumvent these difficulties, Rob Barone-Nugent (University of Melbourne, Australia) and colleagues show in a recent publication in the Monthly Notices of the Royal Astronomical Society that type Ia supernovae are intrinsically more consistent in their peak luminosity when viewed in the near-infrared (NIR). In contrast to optical observations they do not require empirical corrections and can be used to measure cosmological distances to an accuracy of 5% (optical observations have an accuracy of about 10% after empirical corrections are applied). Such precise measurements are essential to the continued study of the expansion history of the universe and hence constrain the nature of dark energy.

The Palomar Transient Factory discovered the supernovae used in the study and were confirmed as ordinary type Ia supernovae by subsequent spectroscopy (geminiann12012a). Using the Near Infrared Imager and Spectrometer (NIRI) on the Gemini North telescope (and in one case the European Southern Observatory’s Very Large Telescope) the team followed the characteristic increasing and decreasing of the NIR luminosity to determine the peak brightness. The team restricted the study to supernovae at distances that are large enough so the overall expansion of the universe (the Hubble flow) determines the motion of their host galaxies, independent of local peculiar motions. While earlier work had already indicated the greater uniformity of supernova emission in the NIR, this is the first significant study to obtain high-quality measurements of supernovae in the Hubble flow (geminiann12012b). Although these observations are difficult because the distant supernovae are faint, this restriction avoids the increased uncertainty due to local motions of galaxies and shows that NIR type Ia supernovae are the most precise standard candles known for cosmological measurements. 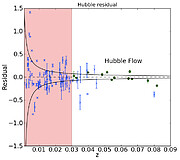