The Coolest Brown Dwarf: A Neighbor in Space

A team of astronomers, led by Phil Lucas of Hertfordshire University in the UK, have discovered what is currently the coldest star-like object. The object, called UGPS J0722-05, is also of particular interest because it is one of our closest neighbors.

UGPS J0722-05 is a cold brown dwarf; these small Jupiter-sized objects are hard to find as they are very faint, and they become fainter, and so even harder to find, with decreasing temperature. UGPS J0722-05 was identified as the only possible brown dwarf in a search of over 600 million sources detected in the plane of our Galaxy by the UK Infrared Telescope (UKIRT) as part of the UKIRT Infrared Deep Sky Survey (UKIDSS). Figure 1 shows the UKIDSS discovery image.

Using the Near-Infrared Imager and Spectrometer (NIRI) on Gemini North a spectrum of UGPS J0722-05 was obtained in early February of 2010. This spectrum is shown in Figure 2 and it clearly shows the extremely strong absorption bands of water and methane, confirming that it is indeed a brown dwarf, and specifically a cool, so-called, T-class brown dwarf. The coolest known dwarfs, the latest-type T dwarfs, are difficult to distinguish from each other in the near-infrared because these bands are so very strong - there is no more water or methane to be absorbed to increase the depth of the spectral features. However, the width of the bands is slightly stronger in UGPS J0722-05 than in any other known brown dwarf, suggesting a lower temperature.

At very low temperatures, more significant changes occur at mid-infrared wavelengths, where 60-80% of the total energy emerges. The investigators obtained longer wavelength imaging data using the IRAC camera on the Spitzer Space Telescope and the Thermal-Region Camera and Spectrograph (T-ReCS) on Gemini South. Theoretical modeling fills in the gaps between the observational data, allowing a determination of the total energy radiated.

With additional near-infrared images, the movement of UGPS J0722-05 with respect to background stars allowed its distance to be determined as well. At only four parsecs (about 13 light years) away, this dwarf is one of the closest objects to the Sun outside the Solar System. Combining this distance with the measured energy shows that the luminosity of UGPS J0722-05 is less than one-millionth of that of the Sun.

Brown dwarfs cool over time as their cores are not hot enough to ignite hydrogen fusion. This cooling is well understood, and allows an estimate of the temperature and mass of a brown dwarf based on its luminosity. The luminosity indicates that the surface temperature of UGPS J0722-05 is only 500K (250ºC or 480ºF) and its mass only 5 to 15 times greater that of Jupiter. Another way of looking at UGPS J0722-05 is that it is an isolated object very much like a free-floating planet very close to the Sun. 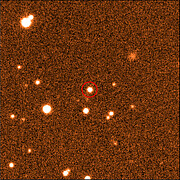