Laura Churcher and UK colleagues at the Institute of Astronomy, University of Cambridge, and the University of Keele have used the Thermal-Region Camera Spectrograph (T-ReCS) on the Gemini South telescope to obtain the first resolved image of the debris disk around the 12 million year old star HD191089 (geminiann10016a). The value of a resolved image of a debris disk is not only that it shows the radial location of the dust in the system but, as in this case, it can also reveal exciting features such as brightness differences in the disk, which hint at hidden planets.

These observations, at a wavelength of 18 microns, show emission from dust that the central starlight has heated. The image of HD191089's debris disk shows that there is dust between 28 and 90 AU (Pluto's orbit is at about 40 AU in the solar system). Inside the inner edge of the disk there appears to be a cavity that is relatively dust-free.

What does this mean for the status of planet formation around HD191089? The difference in brightness between the two sides of the disk could be due to a giant planet orbiting on an eccentric (oval) orbit inside the inner edge of the disk, cutting off the dust belt at 28 AU. It is alternatively possible that the disk is still in the process of forming Pluto-sized rocky bodies, which are causing the planetesimals in the disk to collide more frequently, producing additional dust we see as a bright ring in a more extended disk. In this case the disk still needs to have an inner edge at 25 AU to explain the empty hole nearer the star.

Most stars are born surrounded by massive, gas-rich protoplanetary disks, but by the time they reach six million years old most stars have lost their disks. However, around 15% of main sequence stars (with ages greater than 10 million years) dusty disks still surround them. The dust particles in these disks are small, so radiation pressure from the starlight can blow them out of the system. Because these dust disks are continuously being destroyed, in order for us to see them, the dust must be continuously replenished. This can occur through collisions between bigger rocks–planetesimals–in much the same way that dust in the solar system is produced through collisions between asteroids in the asteroid belt.

At 12 million years old this is an especially interesting time in HD191089’s development. It is just after the dissipation of the protoplanetary disk when the formation of gas giants is finished but the disk might still be in the process of making rocky planets like the Earth. 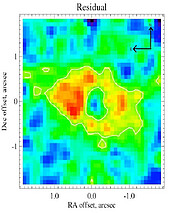