The first two accepted papers based on observations with the Near-Infrared Coronagraphic Imager (NICI) at Gemini South illustrate the instrument’s potential diverse uses. The papers include discoveries of several previously unknown companions in binary star systems as well as the study of the age distributions of stars in the outer regions of the galaxy M83.

Primarily envisioned as a planet-hunting “machine,” NICI combines an 85-element curvature adaptive optics (AO) system, a Lyot coronagraph, and a dual-channel infrared imager into a single instrument. The high image quality provided by the AO system together with the coronagraph’s light-suppression capability optimize NICI for the detection of extremely faint companions to bright stars. To that end, NICI is currently being used in an extensive campaign to search about 300 nearby stars for planetary-mass companions. However, NICI is also useful for many other applications requiring high-resolution or high-contrast imaging. These first papers present the results of two programs executed in the classical observing mode by visiting observers.

Discovering Significant Others in Binary Star Systems with NICI

Andrei Tokovinin (CTIO), Markus Hartung, and Thomas Hayward (both of Gemini) used NICI to survey a sample of 33 nearby wide binary star systems for additional companions. They detected seven close stellar components, six of which are new discoveries. The fraction of stars in this sample with close companions is 12% (7 of 61 stars observed in the 33 systems). As all the close companions are separated from their primary stars by less than 0.5 arcsecond, resolving them would be difficult with traditional seeing-limited imaging but is easy with NICI’s < 0.1 arcsecond AO resolution. In one case, both components of the wide binary HIP 43947 were found to be binary stars themselves, showing that it is actually a hierarchical quadruple system (see Figure 1).

The brightnesses of the close companions detected in this survey were between about 0.5% and 75% of their primary stars. Due to the steep relation between mass and luminosity – a small change in a star’s mass results in a large change in its brightness – the close companions are actually not much less massive than their primaries. In a paper published by The Astronomical Journal (Tokovinin, A., et al., "Subsystems in Nearby Solar-type Wide Binaries," AJ, 140: 510, July 1, 2010) the authors estimate mass ratios of between 15 and 80%, so that even the faintest observed companion is a substantial star, and conclude that the companions formed, like their primaries, by accreting gas from their parental clouds. Planets, by comparison, form in a completely different way – from the tenuous disks of "left-over" material revolving around young stars.

Since about half of all sun-like stars are part of multiple systems, measuring the statistics of close companions in multiples is essential to our understanding of star and planet formation in general. The authors find that the 12% close companion fraction of the NICI binary system sample is similar to the fraction observed in nearby solar-type stars that are single (without wide companions). Furthermore, the distribution of masses appears to be similar. The similar distributions suggest that the formation of close binaries is not strongly affected by the presence of a wide companion, although a larger survey is required to confrim these results.

Digging Deep with NICI: The Stellar Archeology of M83

Using NICI Canadian astronomer Tim Davidge successfully measured the ages of stars in the outer reaches of the nearby spiral galaxy M83 gaining insight into how spiral galaxies evolve.

Davidge, of the National Research Council of Canada’s Herzberg Institute of Astrophysics, obtained very deep images of five regions in the outer envelope within the disk of the spiral galaxy M83 – a sample field is shown in Figure 2. The images reveal some of the faintest stars ever detected in the infrared using a ground-based telescope. The target stars have masses that are not very different from our Sun, but are older, having consumed most of the hydrogen fuel in their central regions and entered a late phase of stellar evolution. These are known as asymptotic giant branch (AGB) stars. Davidge finds that the ages of AGB stars in M83 depend on location, with the outer regions of the galaxy being younger than the inner parts. “M83 is thus a galaxy that is growing from the inside-out,” says Davidge. This work is published in The Astrophysical Journal (Davidge, T., "The Young Outer Disk of M83," 2010 ApJ 718 1428).

The observations of M83 in this study use the adaptive optics (AO) capability of NICI to characterize stars that in turn can be used measure the age of the galaxy. Just as an archeologist uses commonplace items such as pottery and jewelry to date layers in an excavation, astronomers use stars that have well-defined characteristics to act as clocks. While this sounds simple, in practice there are challenges because (1) the stars are faint because they are viewed at large distances, and (2) individual stars must be resolved, and this is difficult if objects are very close together on the sky. The AO capabilities of NICI, coupled with the large aperture of the Gemini telescope, overcome both of these problems.

Many of the nearest galaxies are spirals (like the Milky Way) and astronomers have long known that they contain stars that formed in the early universe. However, it is not obvious if these galaxies formed quickly, or if their formation has been a prolonged process. Standard models of galaxy formation predict that large galaxies should grow slowly with time, and the NICI observations of M83 in this work support this view. Rather than form as monolithic entities – a common view until two decades ago – galaxies do appear to change gradually over time. An important contributor to this development is the gravitational gathering of modest amounts of gas and dust that lies in between galaxies. This material can form new stars once it is accreted into a spiral galaxy. One implication is that galaxies seen at large distances – which are much younger and less evolved than those that are nearby – may be systematically different from nearby spiral galaxies. Unlike M83, which the new observations show has experienced star formation over a nearly 10 billion year timescale, the distant galaxies have not had time to undergo similar later episodes of accretion and star formation. 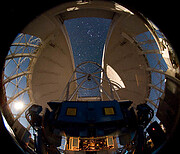 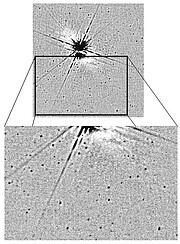