Looking into the distant universe, astronomers look into the past. Observations of distant galaxies directly reveal those galaxies as they once were. They also indicate indirectly the stages of development that result in the nearby galaxies that are typical of our own Milky Way and other older galaxies today.

Christopher Conselice (University of Nottingham, UK) and collaborators used the Near Infrared Imager (NIRI) with the adaptive optics system Altair and laser guide stars on the Gemini North telescope to investigate galaxies at redshifts from z =1 to 2 (when the universe was only 25 to 40% of its current age). They show that the massive galaxies of their sample tended to be extremely compact. These instruments afford high angular resolution, which is essential to measure fine spatial scales in the distant galaxies. In a sense, the galaxies grow "inside-out," adding mass to the outer regions beyond an initial dense core.

Moreover, the sensitive images show evidence for minor mergers, in which these galaxies consume some of their lower-mass companions (geminiann10004a). This merging process thus accounts for some of the growth in both size and mass to produce the normal galaxies of the local universe. Conselice presented this work at the 215th meeting of the American Astronomical Society, and full results will be published in the Monthly Notices of the Royal Astronomical Society (E. R. Carrasco, C. J. Conselice, and I. Trujillo, 2010). 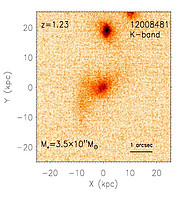