Supermassive black holes, with masses millions and billions of times that of the Sun, reside in the centers of most normal galaxies. However, measuring their masses accurately requires precision observations on very small spatial scales, where the gravitational pull of the black hole dominates over the collective effect of the galaxy's stars.

An international team led by Davor Krajnović of Oxford University has used the adaptive optics facility ALTAIR with the Near-Infrared Integral Field Spectrograph (NIFS) on the Gemini North Telescope to measure black hole masses in two normal galaxies. These data allow the team to determine the motions of stars in the very centers of the observed galaxies (geminiann09021a). Comparisons with model predictions yield mass estimates of the central black holes of 8 x 108 Msun in NGC 524 and 1 x 107 Msun in NGC 2549.

A novel aspect of this work is to use the laser guide star facility in "open-loop" mode. The laser creates an artificial star in the 90km-high sodium layer of the Earth's atmosphere. ALTAIR measures the high-order distortions in the artificial starlight as it passes through the atmosphere to the telescope and corrects for these distortions in the science target. In general, a second nearby, bright "natural" guide star would also be observed, to correct both the low-order variations and the absolute focus of the telescope. However, no suitable bright stars appear near these galaxies. The galaxy nuclei are sufficiently concentrated to measure the low-order ("tip-tilt") variations, but they are too faint to provide the "closed loop" focus control, so this is not determined directly during the observations. Instead, a model based on system tuning measurements prior to the galaxy observations provides the focus correction (geminiann09021b).

In addition to the scientific results of black hole masses and stellar kinematics in the nuclei of these two galaxies, formal demonstration of the applicability of the open focus loop method is included in the paper "Determination of Masses of the Central Black Holes in NGC 524 and 2549 Using Laser Guide Star Adaptive Optics," by Davor Krajnović, Richard M. McDermid, Michele Cappellari, and Roger L. Davies. The work is published in Monthly Notices of the Royal Astronomical Society, 399:1839-1857, November 2009. 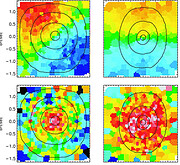