The well-known starburst galaxy M82 is a popular target for telescopes of all sizes, and now an international team led by Mark Westmoquette (University College London) have used optical integral field unit (IFU) spectroscopy from the Gemini Multi-object Spectrograph (GMOS) on the Gemini North telescope to help understand the complex dynamics of its galactic wind. The data, combined with wider-field observations by the WIYN telescope’s DensePak IFU, provide a comprehensive view of the ionized gas near the center of M82.

As one of the nearest analogues of high-redshift star-forming galaxies, M82 provides a unique laboratory for the study of the relationship between intense star formation and the interstellar medium in which it occurs. M82 hosts a complex network of bright clumps centered around the galaxy’s nucleus (within a diameter of about 500 parsecs; Figure 1). Hundreds of young massive star clusters reside in these knots and drive a kiloparsec-scale superwind that is bright in x-rays and the light of Hα.

The high spatial resolution of the Gemini IFU spectroscopic observations show many overlapping and expanding structures of ionized gas in the regions of intense star formation. The team finds that the rotation axes of the gas and stars are offset, which provides supporting evidence that interaction with the nearby galaxy M81 triggered the starburst. While bright, spectrally narrow emission is common, a diffuse broad component is also present, which the authors associate with turbulence on the surfaces of clouds in the dynamic environment.

One region in particular shows evidence for an outflow channel for hot gas, which entrains cooler, denser material. Such outflows may be a mechanism for the chemical enrichment of the surrounding intergalactic medium, if the outflowing material eventually escapes the galaxy’s potential well. However, such coherent outflows are not common in the data, which may be a consequence of the irregularity of the ages, masses, and locations of the stellar clusters that drive them. In general, the electron density decreases along the galaxy’s minor axis (Figure 2), and the highest densities arise in very compact regions, though not in the starburst complexes themselves.

The observations for both papers were made in 2006 and 2007 using the Gemini Multi-object Spectrograph (GMOS) on the Gemini North telescope on Mauna Kea under 0.3-0.8 arcsecond seeing conditions. Each of the over 1000 IFU spectra had a spectral coverage between 6100-6790 A in order to cover diagnostic lines of Hα, [NII]λλ6548, 6583, and [SII] λλ6716, 6731. In addition to the Gemini and WIYN IFU data, the Hubble Space Telescope (HST) provided images. 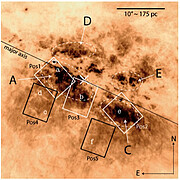