The team of Robert Blum (NOAO, Gemini Science Center) and Peter McGregor (Australian National University) observed the 3 arcsecond NIFS field at the core of the region, (covering 0.1 parsec at the object’s estimated distance of 7 kiloparsecs). They found sharp density variations that are thought to result from the action of the high mass central source radiation field and stellar wind on its birth cocoon and immediate surroundings. The observations were made at the Fredrick C. Gillett, Gemini North telescope on Mauna Kea, Hawai‘i in July of 2006.

The high angular resolution of the data (~0.2 arcsecond), moderate spectral resolution (approximately R = 5200), and detection of multiple spectral lines (Brγ, He I, [Fe III], [Kr III], [Se IV] and H2) allowed a detailed analysis of K3-50A (see Figure 2), including resolving ionization structure in the HII region as a function of position. Among the findings of this analysis is a bipolar kinematic feature that is not symmetric about any detected point source or ionized outflow seen in earlier radio continuum and recombination line studies. Several possibilities exist to explain the feature. It may be that a lower mass protostar is associated with the central star of K3-50A and its protostellar outflow is being ionized by the hot central source. Alternately, the bipolar flow may be the origin of a large-scale outflow seen in the radio which is re-directed by the material surrounding the compact central source.

K3-50A has a long history of observations that have spanned the spectrum from optical to radio (though the central source itself is highly obscured at optical wavelengths). The Gemini observations consist of near-infrared K-band spectra over NIFS’s ~3x3 arcsecond field which is sliced into 29x69 rectangular spatial pixels (spaxels) for a datacube of 2,001 elements. While this data cube has provided a detailed look at the nebular structure on a fine spatial scale, the central source itself remains a mystery. The putative massive young star is still veiled by the intense nebular continuum arising in its circumstellar environment: even with adaptive optics, no photospheric features of the star were detected. 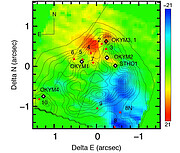 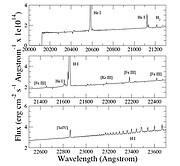