The long-term weather loss for Gemini North for the 18 northern hemisphere “winter” weeks December 24, 2008 through April 28 is about 35%. Figure 1 shows the range and average cumulative weather loss typical for Gemini North for these 18 weeks (orange shaded area of figure). The weather loss for this period of the past winter was 55.4% and is shown as the solid red line. The weather loss for the same period at Gemini South is shown in green on the figure. Like Mauna Kea, the summer at Gemini South is optimal for observing and this particular summer at Gemini South has been very productive for our science programs. Figure 2 summarizes the total time usage at both Gemini North and Gemini South during this period by week. At Gemini North technical losses amounted to 3.5% of the useful time (below the long-term average), while 33.6% of the time was used for science observations. A planned shutdown in January accounts for the remaining time. This shutdown was used for maintenance of the acquisition and guiding system and engineering, primarily to get the telescope back on the sky after the shutdown. It is also worth noting that during the months Feb-April (half of 2009A) the weather loss at Gemini North was 61.7%.

In the 18 week period the total science time charged at Gemini North was about 40% below typical values for this time of the year. Figure 3 shows this, together with time charges at both telescopes, in similar periods for the previous 3 years. In 2005-06 the weather loss for Gemini North was 45% during this same period. This is reflected in the lower amount of charged science time for that period.

In addition to the large weather loss, the conditions were very poor when the telescope could be used on the sky during the 2008-09 winter on Mauna Kea. Figure 4 shows the distribution of time in six broad observing condition bins, based in the header information of the science data taken. The grey bars show the expected distribution used for filling the queue. The green and blue bars show semesters 2007B-2008A for Gemini North and South respectively. These semesters are fairly typical and show that of the time Gemini North is open about 77% is photometric (bin 1+2+4). The “prime conditions” CC=50% (photometric) and IQ=70% (seeing in the optical better than 0.8 arcsecond) occurs about 64% of the time when the telescope is open (bin 1+2). During the 18 weeks of the winter 2008-09 on Mauna Kea only 34% of the time open was photometric, and only 15.7% of the time open was in “prime conditions.” Thus, when observations were possible, few of the high ranked programs requiring the very good conditions could be executed.

The very high weather loss on Mauna Kea this winter has a significant effect on the status of the queue programs, and on our classically scheduled programs as well. The poor, but still useful weather, started even earlier in December, resulting in a complete loss of the December laser guide star (LGS) adaptive optics run (Dec 9-18, 2008). From December through April there have been only two of the 42 scheduled LGS nights where conditions were good enough to execute LGS programs from the queue.

The effect of the winter weather on the completion rates for Gemini North queue programs is expected to be significant. If we assume that the weather for the remainder of this semester will be closer to normal (i.e. 20-25% weather loss and a distribution in observing conditions when we can open that resembles the long-term average) we can then estimate completion rates for band 1 and 2 programs. With these assumptions, the completion rate for 2009A band 2 programs is estimated to be no greater than 60%. To optimize the science productivity of the time spent observing band 2 programs, the queue coordinators are prioritizing the programs and concentrating on programs that are likely to produced useful datasets. Thus, some 2009A band 2 programs will unfortunately not get any data. For 2009A band 1 programs we may reach 70% completion, though the completion could be lower depending on the distribution of the weather loss for the remainder of the semester. As many of the band 1 programs have rollover status, we expect 30-50 hours of queue time in semester 2010A to be reserved for completion of these rollover programs. The completion rates after rollover may reach 80%. 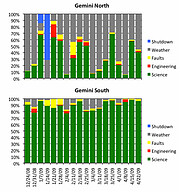 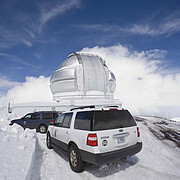