A Cool Dwarf in Aquarius

An international team led by Ben Burningham (University of Hertfordshire) has discovered a brown dwarf that will likely set the record as the coolest body ever detected outside our solar system. The object, named Wolf 940b, and its central star, a red dwarf named Wolf 940, lies in the constellation Aquarius at a distance of 40 light-years from Earth. Wolf 940b orbits its star at a distance of around 440 astronomical units, more than ten times farther out than Neptune orbits the Sun. At this distance, it takes wolf 940b around 18,000 years to complete a single orbit.

The mass of Wolf 940b is probably between 20 and 30 times that of Jupiter. This places it directly in the regime of “brown dwarfs” – objects that are too large to be considered planets but are too small (and cool) to be classified as stars. With a surface temperature of approximately 300 degrees Celsius Wolf 490b is the coolest brown dwarf measured to date. Burninghan says that free-floating objects with temperatures similar to this have been suspected before, but this is the first time he and his team were able to confirm it. The fact that it is orbiting a star makes it extra special.

Due to such low surface temperatures, objects like Wolf 940b do not emit much visible light. However, they glow brightly in the infrared. Because of its glow, Wolf 940b was initially discovered as part of the UKIRT Infrared Deep Sky Survey (UKIDSS), a large survey project being carried out at the United Kingdom Infrared Telescope (UKIRT) on Mauna Kea. The object was found as part of a wider effort to discover and characterize the least luminous objects in the solar neighborhood. When its proper motion revealed it as a companion to Wolf 940 follow-up observations to determine its nature were initialized.

Indeed, spectroscopy done using the Near-infrared Imager and Spectrometer (NIRI) on Gemini North allowed the team to determine the surface temperature of this record-setting brown dwarf. By comparing the data collected by Gemini to complex atmospheric models, the team was able to assign a surface temperature and a spectral type of T8.5 to object.

This object is going to continue to provide insights into the processes of cool brown dwarfs, and warm planetary atmospheres for some time to come and finding it was just the first step. 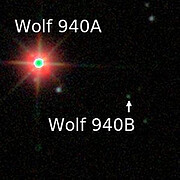