Certainly one of the strangest objects in our Milky Way galaxy has been hiding as a variable X-ray source called SAX J1808.4-3658. This X-ray binary has been known to contain an accretion-powered millisecond pulsar located at a distance of 3,500 parsec (~11,500 light-years). It was also the first identified millisecond pulsar system among X-ray binaries. Recent observations with GMOS-S (Gemini Multi-Object Spectrograph – at Gemini South) have revealed a large periodic modulation of its quiescent optical emission. The observations show a light curve with a remarkably regular sinusoidal shape of ~0.4 magnitude in amplitude in r’ band (Figure 1).

Conducted by the Canadian-Dutch team led by Zhongxiang Wang (McGill University), the new observations indicate that the light curve modulation is caused by irradiation of the companion star to the pulsar, and not by activity in the accretion disk.

The pair is strange because it is comprised of an unusual couple: a 1.4 Msun neutron star, which is a ball of neutrons about 10 kilometers in radius, rotating every 2.49 milliseconds. The neutron star is the remnant of the supernova explosion of a massive star and its X-ray pulsar activity driven by accreting mass from its mysterious low-mass companion. However, its optical light–both its persistence and modulation–is not well understood.

The orbital period of the J1808.4 system is only about 2.01 hours. The companion is also strange, most likely a 0.05 Msun brown dwarf, comparable in size to Jupiter. The binary separation is about 6.3 x 105 kilometers, assuming a 1.4 Msun neutron star. This separation is about one solar radius or approximately twice the Earth-Moon distance. Amazingly, not only did the brown dwarf survive the explosion of the progenitor, but also managed to get pulled inward very close to the neutron star remnant.

Being very close to the neutron star, strong tidal forces shear the companion and transfer mass to the neutron star. This mass is stored in a disk that builds up the surface density and triggers a periodic X-ray outburst once every 2-3 years. The optical modulation is assigned to X-ray irradiation of the companion. The rotation of the close companion is locked to its period of revolution so the same side always faces the neutron star. From the earth, the visible area of the heated face varies as a function of orbital phase. The new Gemini observations show that the modulated light comes from the irradiated companion while the persistent light comes from the accretion disk. 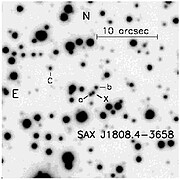