In the context of the currently favored cosmological Λ-Cold Dark Matter model of the universe, the formation and evolution of galaxies remains a major unsolved problem. In particular, the detailed evolution of the bulge and disk components of spiral galaxies is not well represented in current simulations. The data–model discrepancies do not necessarily reflect a failure in the ΛCDM model, but may indicate physical regimes and processes that are either poorly understood or difficult to implement in large simulations. Given the significant challenges faced by current galaxy formation models, guidance towards a true understanding of disk galaxies must come from an observational perspective such as the one described here using the Gemini Multi-Object Spectrograph.

A very useful probe in discerning between formation scenarios is a detailed breakdown of the age, metallicity (Z), and kinematic properties of the stellar population (SP) content comprising bulges of all types. Information about both light- and mass-weighted quantities is needed to form a comprehensive picture of the star formation history (SFH) of a given system. Beyond our Local Group, observations are limited to the integrated light along a given line of sight, which must then be deconvolved into the the relative fractions of stars of a given population that contribute to the total light. This challenge is especially acute for spiral galaxies that are known to harbor a mixture of young and old stars and may also suffer from dust extinction.

The high-quality GMOS spectra were used to develop a "full population synthesis" technique to determine the stellar content of each spectrum. The method consists of an optimized linear combination of Simple Stellar Population (SSP; i.e. single bursts of star formation at a given age and Z) model templates to the full spectrum while masking regions poorly represented by the models. The inferred stochastically-sampled SFH yields the true average stellar population parameters for each spectrum. This differs from many studies which provide SSP-equivalent values that are heavily biased to the last episode of star formation, even when its contribution to the stellar mass budget is minimal. Two examples of the full population synthesis fits are shown in Fig. 2.

The GMOS spectra also enabled kinematic measurements (velocity dispersion and rotation) and the assessment of trends among physical parameters. The left side of Fig. 3 shows the average light- (black) and mass- (red) weighted central SP values as a function of central velocity dispersion, σ0, for the eight galaxy bulges in the Gemini/GMOS sample. The trend of increasing average bulge age and Z with σ0 in the light-weighted values disappears when considering mass-weighted values, indicating that the mass of all spiral bulges is dominated by a population of very old and metal rich stars. The right side of Fig. 3 shows those light-weighted values against literature data for spheroids of all types (i.e. pure elliptical galaxies and spiral bulges). They all follow the same trend of increasing spheroid age and Z with σ0. However, when a SFH more complex than a single burst is considered, the slope and the scatter of the age-σ0 relation are significantly reduced.

These results imply that bulge formation is dominated by processes that are common to all spheroids, whether they currently reside in disks or not. The formation process occurs on shorter timescales for spheroids with the highest central velocity dispersions, and the relative contribution to the stellar mass budget in bulges via secular processes or "rejuvenated" star formation is small, but generally increases in weight with decreasing σ0. 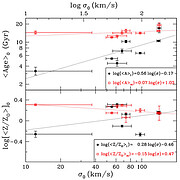 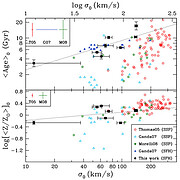