A recent optical spectroscopic study led by Guillermo Bosch (Universidad de La Plata), Elena and Roberto Terlevich (INAOE, Tonantzintla) used the spectro-imager GMOS-South to reveal that a surprisingly high fraction (>50%) of the stars in the cluster NGC 2070 are binary. This massive cluster is responsible for ionizing the gas in the spectacular 30 Doradus nebula located in the Large Magellanic Cloud.

The fraction of binaries is an important factor influencing the initial mass function (IMF), the cluster’s age, and dynamical mass determination. Although a large amount of work has been done on 30 Doradus and its ionizing cluster, little is known of it binary fraction.

Bosch and his colleagues obtained optical spectroscopy with the Gemini Multi-Object Spectrograph (GMOS) on Gemini South of 52 early-type stars on six epochs. Radial velocities derived for each night were very stable, with variation less than 1.0 km/sec. Twenty-five out of the 52 stars were found to be binary candidates. This is a very high mass fraction, considering that the finding here is only a lower limit.

The authors also derived the velocity dispersion for single mask epoch and found values as high as 30 km/sec. But after removing binary stars from the sample they were able to derive - for the first time - the velocity dispersion of NGC 2070 free from contamination by the motion of binary stars. With this sample, they found a much lower value, about 8 km/sec. The stellar mass within the volume covered by this spectroscopic survey is about 4.5 x 105 solar masses.

The authors write in their paper: “The success of GMOS in the MOS mode makes it a very efficient tool for discovering massive binaries in large numbers using a relatively small amount of telescope time.” 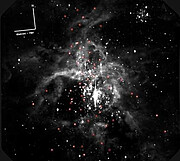 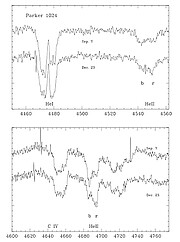