Supernova 2006jc occurred when its massive progenitor star ended its life in spectacular fashion. The star exploded following a Luminous Blue Variable (LBV)-like outburst two years before (Pastorello et al.2007, Nature, 447, 829). An international team led by Seppo Mattila (Queen’s University, Belfast and University of Turku) observed the supernova and followed its evolution between days 86-493 after the explosion with an array of telescopes including the Gemini North telescope (using the Near Infrared Imager NIRI), the United Kingdom Infrared Telescope (UKIRT) and the Spitzer Space Telescope. This exceptional event has contributed significantly to our understanding of how core-collapse supernovae (SNe) and their progenitors can add to the dust content of the universe.

Mattila et al. imaged SN 2006jc in the near infrared between days 86 and 493 with the UKIRT and Gemini North telescopes (Figure 1). Mid-IR observations were obtained with the Spitzer Space Telescope before the explosion and at 228 and 430 days post-explosion. SN 2006jc developed a strong near-IR excess after ~55 days (Arkhrarov et al. 2006, ATel, 961). At the same time an abrupt steepening was observed in the optical light curves. This persisted until ~120 days post-event, as is expected if new dust was condensing in the line of sight to the SN. Relative to the slopes seen between 50 and 65 days, the additional attenuation by day 120 is roughly Av ~ 3.

Mattila’s team considered the possibility that the bulk of the near-IR emission arose from dust lying much closer to the SN than the closest pre-existing dust that could have survived evaporation in the explosive event. Such dust would have to form after the peak luminosity; indeed, the dust might be formed during the interaction of the SN ejecta with a pre-existing shell that was ejected in the LBV outburst two years before the SN explosion. The team found that the interaction was able to produce a cool dense shell (CDS) behind the forward shock around 55 days after the explosion. They modeled IR emission from the newly formed CDS dust using an IR echo model (Figure 2). The source of energy for the echo was assumed to be the UV/optical radiation from the SN ejecta.

To explain the cool late time IR emission another dust component was required. The progenitor system of SN 2006jc would be expected to have undergone longer-term mass-loss, producing an extended circumstellar wind. The team therefore assumed a constant mass-loss-rate from the progenitor star and therefore an r-2 density distribution for the pre-existing dust (outside the dust evaporation radius). The input luminosity for the IR echo was assumed to be the UV/optical radiation from the SN ejecta.

The IR two-echo model results are compared with the data in Figure 3. The mass of newly formed dust in the CDS reached 3 x 10-4 Msun by 230 days. If the dust mass continued to grow, it would asymptotically approach 4.4 x 10-4 Msun. For the wind component, Mattila et al. obtained a dust mass of 8 x 10-3Msunand inner and outer radii of 7.5 and 30 x 1017 cm, respectively, for a 0.13 micron grain size. The inner radius is much larger than the dust evaporation radius (~1017 cm). Such a large cavity could be due to episodic mass loss from the progenitor of SN 2006jc. The UV/optical optical depths are 3.7 and 0.019 for the CDS dust and CSM dust, respectively, in a good agreement with the increase in the extinction of Av ~ 3. The equilibrium temperature for the CDS model component declined rapidly (Figure 3) reaching 1900 K (max. condensation temperature for amorphous carbon) at 49-61 days in good agreement with the time the near-IR emission appeared.

The bulk of the near-IR emission from SN 2006jc arose as an IR-echo from newly-condensed dust in a cool dense shell (CDS). The CDS was produced by the interaction of the ejecta's outward shock with a dense shell of CSM previously ejected by the progenitor star. This is the first supernova where this effect has been seen, although a similar reverse-shock effect was found by Pozzo et. al. (2004, MNRAS, 352, 457) in SN 1998S. The physics of the CDS dust formation invoked here is reminiscent of the radiative shock of colliding winds of Wolf-Rayet stars which is well known to be a dust-forming site. In contrast to the near-IR, most of the mid-IR flux arose as an IR echo from dust formed in the CSM before the explosion. The total directly-observed dust mass is about 0.01 solar masses, of which most formed in the CSM before the explosion. This work therefore adds to the evidence that mass loss from the progenitors of core-collapse SNe could be a major source of dust in the universe. 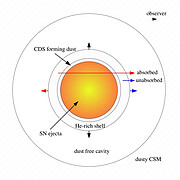