Optical spectroscopy from the Gemini telescopes has revealed a relatively uncommon type of asteroid in the main-belt for the first time. The discovery was made by a joint Brazil and US project led by Thais Mothé-Diniz of the Observatório Nacional in Rio de Janeiro and David Nesvorný of the Southwest Research Institute (Boulder, Colorado). The team used both GMOS North and South to obtain optical spectra of asteroids with estimated ages of < 1 Myr which they then compared to laboratory spectra of meteorites that have fallen to Earth. They found that spectra of asteroids in the newly discovered Datura family have a deep absorption feature near 0.8 microns which classifies them as ‘Q-type’ asteroids. This spectral feature is produced by silicate material, in particular olivine and pyroxene. Most interestingly, the spectra of Q-type objects are well-matched to the most common type of meteorite found on Earth called an ordinary chondrite (OC).

This is an important result since we do not know (with a few exceptions) the location of the parent bodies that form the meteorites that we find on Earth. Since we believe that many of the objects we find here come from the main asteroid belt, the lack of any asteroids that have a spectrum similar to OCs has been a long-standing and fundamental problem in planetary science. One theory as to why it has been difficult to find the parent bodies of OCs is that the process of “space weathering” changes the shape and depth of spectral features of asteroids in relatively short timescales.

To circumvent this difficulty, Mothé-Diniz and Nesvorný used numerical methods to determine where they hoped to find some of the youngest asteroids in the main-belt. They then took GMOS spectra of these objects with the hypothesis that the surface of the youngest asteroids will likely not ‘weathered’ and will therefore show the unaltered shape of the objects spectrum.

Particularly exciting are the spectra of objects in the Datura family (Figure 2). Probably formed by the breakup of a larger body, this newly discovered family of objects is only 450 +- 50 thousand years old. This makes its members some of the youngest asteroids in the main-belt. It is also notable that the sensitivity of the GMOS instruments made it possible to obtain high signal-to-noise spectra of these objects in about one hour per target, even though the targets were only a few kilometers in diameter.

As seen in Figure 3 the spectrum of (1270) Datura is a good match to that of an OC found on Earth (named Fayetteville, presumably as a nod to where it was found). The fact that the spectrum shows a deep and well defined absorption feature near 0.8 microns is what allowed the team to classify this target as type Q (or perhaps type Sk, a classification similar to Q). This result will likely have a broad impact on the study of OCs and young asteroid families since there is now a strong connection between the objects we find here on Earth, and those we observe in the main asteroid belt. The authors note that more observations, especially in the near-IR, would strengthen this result. 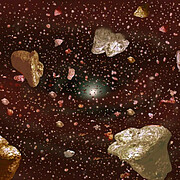 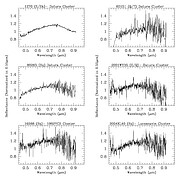 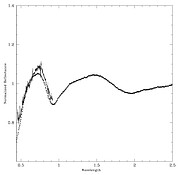