During the second half of July 2008, the Gemini North telescope facility on Mauna Kea underwent a major 20-day scheduled shutdown. The shutdown allowed engineers and technicians to address a number of deferred upgrades and maintenance projects, (see a list of projects here), that are only possible during an extended period of electromechanical work. Included was the successful re-coating of the 8-meter primary mirror with protected silver.

"As a scheduled shutdown, we are able to take care of maintenance and upgrades that are not possible when we are on the sky each night," said Brian Walls of Gemini's Systems Engineering team. "And while the new silver coating gets most of the attention, the concurrent work done on the telescope is critical since the entire telescope system needs to function at the same high level..."

About four years ago the Gemini North telescope's primary mirror received its first protected silver coating and during this period its durability has exceeded expectations and compares favorably more traditional aluminum coatings used on other large telescopes. The new coating was completed on July 29th and testing has confirmed that it has slightly better reflectivity than the previous coating (See Figure 3). After testing and calibrations, the mirror resumed collecting light for science observations on the night of August 3rd.

The new coating restores the high reflectivity of the Gemini North mirror in the optical (visible) part of the spectrum as well as the low thermal emissivity that silver provides. Low thermal emissivity is critical to Gemini's exceptional performance in the mid-infrared part of the spectrum. The emissivity of Gemini North telescope system (with prior mirror coatings, in December 2005) was ~5% at 12.10 microns (between sky lines). Updated values with the new coatings will be obtained once the mid-infrared instrument MICHELLE is scheduled back on the telescope.

The shut-down team consisted of a maximum of 38 technicians, engineers and support staff (13 from the Gemini South facility in Chile) who will assemble again in 2009 to do a scheduled shutdown and recoating of the Gemini South telescope's primary mirror. It is estimated that the entire shutdown required some 11,000 person-hours of work in preparation and execution.

The 4-layer protective silver coating used for the Gemini mirrors is unique to Gemini and allows the telescopes to efficiently reflect optical light while maintaining exceptionally low thermal emissivity for infrared observations. 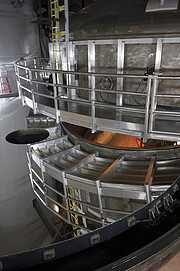