Based on laser guide star adaptive optics (LGS-AO) -fed integral field spectroscopy with the Near-Infrared Spectrograph (NIFS) at Gemini North, Anil C. Seth of the Harvard-Smithsonian Center for Astrophysics and his collaborators demonstrate that the massive nuclear stellar cluster at the core of the spiral galaxy NGC 4244 is strongly rotating.

Most late-type spiral galaxies and early-type galaxies have prominent nuclear star clusters (NSCs), i.e. a significant conglomerate of stars about the same size (~ 5 parsecs) as normal globular clusters. Furthermore, the masses of NSCs are coupled to the mass of their host galaxy, following the similar mass vs. velocity dispersion relation known for massive black holes. This suggests that the formation of NSCs and black holes are linked to the formation of their host galaxy. However, unlike that of black holes, the assembly history of NSCs can be inferred from studies of their kinematics and stellar content.

NGC 4244 is beautiful edge-on galaxy located at 4.3 Megaparcecs (14 million light-years away, Figure 1). It harbors a tiny but impressive NSC that shows a clearly flattened shape in HST optical imaging (Figure 2) and the reconstructed K-band NIFS image (Figure 2b).

Using the powerful adaptive optics spectro-imaging technique offered by NIFS the team, led by Seth, explored the kinematics and stellar content of the NSC. The infrared domain allows a more direct view of the center of the galaxy because it is less sensitive to extinction by dust. The most significant finding by the team is that the NGC 4244 NSC is strongly rotating at about 30 kilometers/second within the central 0.5 arcsecond or 10 pc (~32 light-years) radius. The NIFS measurements show clearly that this rotation is shared by both the younger disk component and the older, more spheroidal component (Figure 3). The central cluster is not counter-rotating as seen in some other systems.

Assuming a Keplerian rotating disk, the rotation amplitude suggests a mass of 1.7 million solar masses enclosed within the central 8 parsecs (~25 light-years). Detailed dynamical modeling of the system will help to place constraints on the presence of any black hole inside the cluster.

The NIFS observations also confirm the existence two different star populations in the NSC as found from earlier HST optical data and analysis. The separation of the two different components in the spectra enables the determination of both component’s kinematics. Among the various models that explain the formation of NSCs, the authors favored episodic accretion of gas and young star clusters from the larger galaxy disk. 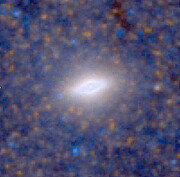 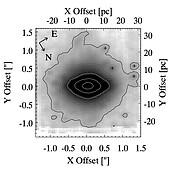 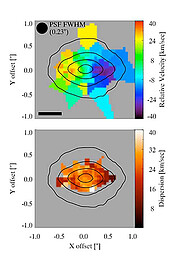