More Evidence of Gas Inflows Into an Active Galaxy’s Nucleus

A team of astronomers led by Ph.D. student Rogemar A. Riffel (Universidad do Rio Grande do Sul) have detected streaming gas flows toward the Seyfert nucleus of NGC 4051 located at an estimated distance of about 9.3 Megaparsecs. They used the Near-infrared Field Spectrograph (NIFS), fed by Altair, the Gemini North adaptive optics system, to target the central core of the galaxy. Unlike earlier optical observations of gas inflows into other active galactic nuclei (AGN) (NGC 1097, see GeminiFocus, June 2006, p. 22 and NGC 6951, see ApJ, 2007, 670. 959) these new infrared observations provide even stronger evidence of such inflows since the extinction effects due to dust are less severe in the infrared.

To achieve this new result, accurate subtraction of the stellar velocity field from the gaseous velocity field allowed the researchers to isolate non-circular motions observed in the H2-emitting gas (geminiann08007a). Two nuclear spiral arms – one observed in blueshift on the far side of the galaxy and the other observed in redshift in the near side of the galaxy – are interpreted as inflows towards the nucleus. However, the mass inflow rate of ΔM/Δt ~ 4 x 10-5 Msun per year is 100 times smaller than the accretion rate necessary to power the active nucleus. These observations may be detecting only the “hot skin” of the total gas flow dominated by cold molecular gas. The hot H2 is heated by x-rays from the AGN.

The NIFS observations show the turnover of the stellar rotation curve to be at only ~55 parsecs from the nucleus (geminiann08007b). This curve suggests that the stellar motions are dominated by a highly concentrated mass. 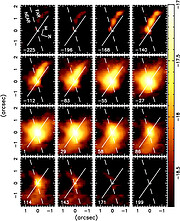 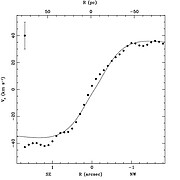