This page highlights a sample of Gemini related science results presented at the 211th meeting of the American Astronomical Society meeting in Austin Texas from January 7-11, 2008.

Robert Blum (NOAO) and Peter McGregor (ANU) used the Near-Infrared Integral Field Spectrometer (NIFS) + AO on Gemini North to study the Galactic Ultra-Compact HII region G45.45+0.06. The NIFS data let Blum and McGregor identify several massive O-type stars which are responsible for the ionization of the region. In the paper, “The Ionizing Stars of the Galactic Ultra Compact HII Region G45.45+0.6” several sources were characterized, including two embedded sources that exhibit CO bandhead emission that is likely a signature of accretion from massive young stellar objects within the complex.

Based on data from the Phoenix Spectrometer on Gemini South, Hao Yang and Christopher Johns-Krull of Rice University and Jeff Valenti of StSCI will present a poster titled, “The Magnetic Fields on T Tauri Stars in the Orion Nebula Cluster.” The team observed Zeeman splitting in three Ti I lines to measure the strength of the surface magnetic field of 15 T Tauri stars in the ~1 Myr old Orion Nebula cluster. The resulting field strengths were then compared to other clusters and associations of different ages (e.g. Taurus-Auriga) to shed light on how these magnetic fields are generated.

In the paper “What Happened to Eta Carinae in Early 2007,” PI John Martin of the University of Illinois and an international team of researchers used data from HST and Gemini that help explain the ~0.25 mag dimming of Eta Car in early 2007. During the fading event photometry was gathered using WFPC2 and an optical spectrum was obtained with GMOS on Gemini South, both sets of data help explain this unusual event.

High-resolution near-IR spectroscopy from Phoenix on Gemini South let a team led by Simon Schuler (NOAO/CTIO) investigate the presence of “Fluorine in the Carbon-Enhanced Metal-Poor star He 1305+0132.” This star is the most Fe and O poor-star – by 1.5 orders of magnitude – for which the abundance of 19F has been derived. The results of the analysis imply that the atmosphere of He 1305+0132 has been polluted by mass-loss from a companion AGB star. Also, the results imply that nucleosynthesis is extremely efficient in low-metallicity AGB stars, suggesting that AGB stars play a major role in the chemical evolution of the galaxy.

A research team led by Claudia Knez (University of Maryland) used the mid-infrared spectrometer TEXES on the Gemini North telescope to study water lines in the circumstellar disk around RW Aur A. The poster, titled “TEXES High Resolution Observations of Water in a Proto-planetary Disk” describes double peaked water lines that appear to be tracing the gas in the disk inward of 1.1 AU at a temperature of between 450- 700 K. 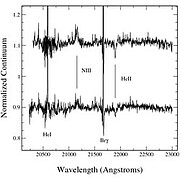 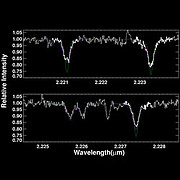 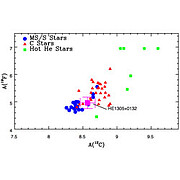