On December 3-4, 2007, more than 70 engineers, technicians, safety officers and coordinators, administrative personnel and astronomers from observatories around the world met in La Serena, Chile for the first Chile Observatory Earthquake Preparedness Workshop. The goal of the workshop was to develop better means to protect our staff and our valued equipment in case of a major earthquake.

Chile has one of the highest rates of seismicity in the world and was in fact the location of the most intense earthquake ever recorded; the M9.5 earthquake in 1960, which, combined with its resulting tsunami, caused thousand deaths and devastation in Chile, Hawai‘i, the Philippines, Easter Island and Samoa. Astronomical Observatories in Chile will experience the effects of one or more major earthquakes in their lifetimes and we need to be prepared. About two weeks before the workshop, a magnitude 7.7 earthquake hit in the region around the northern town of Tocopilla, which destroyed or damaged several thousand homes, displacing about 15,000 people[1]. Although the earthquake was strongly felt at ESO/Paranal and at the Alma site of San Pedro, there was no damage at either site. Still this was a strong reminder that we operate in areas of high seismic risk. The Chilean active tectonic and seismic context was described in detail by Universidad de Chile Geophysicist and Seismologist, Sergio Barrientos, in a stunning and most informative review of Chilean seismicity.

Science has many roles in the forecasting and mitigation of natural hazards. The workshop participants provided unique perspectives and advice on the technological and organizational solutions for giving early warning, identifying areas at risk, designing effective mitigation strategies and developing approaches to relief in the context of our observatory systems.

This workshop addressed the technical issues associated with keeping structures and infrastructure intact and the safety and health issues for affected personnel prior to, during and after a severe earthquake. In addition to covering seismicity in Chile, discussions also included:

Over a period of two days, the attendees reviewed this information with focused presentations, general discussion and several small working groups covering specific issues. The outcome of the workshop is a heightened sense of awareness of the seismic threat that we face, the initiation of collaborations where appropriate and concrete steps toward the mitigation of the seismic risks that we all face. Some follow-up actions were taken by the organizers and the participants of the workshop.

When one needs to address how to prevent and confront disaster losses our observatories are small and isolated high technology “universes.” Many of our facilities are in areas of relatively high seismic risk but our structures are extremely well-built and prepared for rather severe events. Our organizations are small, well-defined and well-managed and allow for numerous improvements which are continuously implemented into the various engineering, structural and organizational systems. Because of the nature of our organizations and systems, it is reasonable to expect that we could serve as models for other organizations and institutions with similar risks.

In a recent study published in Science, Bouwer et al., [3]several issues were raised that, when improved, will reduce risks from disasters. Although they apply in a much larger-scale societal context, their applicability to our observatories should be considered. These issues include:

a) Improving data collection “Records of disaster losses are of poor quality, inhomogeneous, and collected using a wide range of methods for different purposes, …” Our records are very limited, probably mostly from the October 15, 2006 earthquake in Hawai‘i and the November 2007 Tocopilla earthquake in Northern Chile, (i.e. the more recent events). For previous earthquakes our recording tools at the telescope sites were of limited scope. The networking and recording capability has improved dramatically, especially in Chile where a seismic network has been in place for several decades and includes a huge quantity of data. The observatories need to, and will, establish closer links with the Universidad de Chile center where this data is collected.

b) Expand the role of disaster risk reduction The cost-benefit ratio of disaster risk reduction ranges from 1:2 to 1:4 [4]. Mitigation strategies, good planning, better protective measures can drastically improve our ability to “survive” medium strength earthquakes by factors even higher than those quoted above. We need to plan for large earthquakes affecting our current facilities, but also try to understand the impact of moderate size earthquakes like those we have experienced recently on much larger and complex telescopes like TMT or the Extremely Large Telescope (planned by ESO). Above all else, we need to plan how we can become better at surviving an extremely large earthquake like those Chile has experienced in the past century – “we” meaning ourselves and our staff, our colleagues and our families. Prevention is much more cost-effective than trying to react in the context of an unplanned destructive event.

c) Develop and apply innovative finance mechanisms Although this is clearly an area of discussion for large-scale disasters affecting large segments of society, we should not be completely “out of the box” in responding to risks of strategic losses with innovative products. We are self-insured through our agencies or institutions – but is that enough? Should we be more aggressive in budget planning to clearly identify line items and projects that support risk reduction? Should we encourage our agencies in the context of globalization to work together to develop an insurance scheme or finance solutions? Already, the current effort at collaborating in order to review and reduce our risks is an extremely positive step. 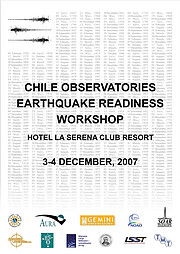