A fossil group of galaxies is a system of several dozen galaxies with an extended and luminous X-ray halo (Lx > 1042 ergs/sec). Its striking feature is that it is dominated by one single very luminous elliptical galaxy and surrounded by low-luminosity companions. In these systems the difference in brightness between the bright dominant elliptical and the next brightest companion is 2 magnitudes or more (in optical R band). This is as if the bright galaxy had absorbed several of its smaller companions over the history of the group. Compact groups have many members but they have a better balance of bright galaxies.

It has been suggested that fossil groups could be the cannibalized remains of compact groups where several of the more massive objects lost energy through tidal friction and merged. In the nearby universe compact groups which are close to the merging phase (and display a wealth of interacting features - such as HCG 31 and HCG 79) have very low velocity dispersions and evolve in a low density environment. This is much unlike the massive, cluster-like fossil groups studied to date.

Recently, Claudia Mendes de Oliveira (University of Sao Paulo, Brazil) and Rodrigo Carrasco from Gemini Observatory (La Serena, Chile), studied the dynamical properties of CG 6 (number six in the catalog of compact groups of galaxies by Lee et al. 2004), CG 6 is a massive compact group at a redshift z=0.22, that has several properties in common with known fossil groups. The study is based on multicolor imaging and deep spectroscopic observations obtained with the Gemini Multi-object Spectrograph (GMOS) at Gemini South.

Mendes de Oliveira and Carrasco show that CG 6 has 20 member galaxies, within a radius of 1 megaparsec and a velocity dispersion of 700 km/sec. They derive a mass of 1.8 x 1014 solar masses, similar to that of most known massive fossil groups. The authors also predict that the merging of the four central galaxies in CG6 would form a galaxy with magnitude Mr~ -23.4, typical for the first-ranked galaxies of fossil groups. Although nearby compact groups with properties similar to CG 6 are rare in the local universe, the authors surmise that such systems occurred more frequently in the past history of the universe and may be the precursors to fossil groups. 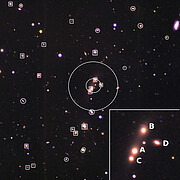 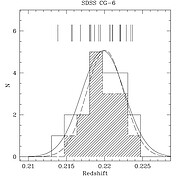