A Canada-US-UK team led by David Lafrenière and René Doyon of the University of Montreal has released the first results from the Gemini Deep Planet Survey (GDPS), a near-infrared adaptive optics search for giant planets and brown dwarfs around 85 nearby young stars. The observations, made with the ALTAIR/NIRI adaptive optics system at the Gemini North telescope, are aimed at constraining the population of Jupiter-mass planets with orbits that have a semi-major axis in the range of 10-300 astronomical units (AU). This work constitutes a first step toward the detection of the population of “outer” giant planets around other stars.

The use of angular differential imaging (see ADI "how-to" box below) in conjunction with NIRI/ALTAIR enabled the team to reach the best sensitivities to date for detecting giant exoplanets with projected separation above ~0.7 arcsecond. The typical detection limits (5 sigma) reached by the survey, in magnitude difference between an off-axis point source and the central star, are 9.5 at 0.5 arcsecond, 12.9 at 1 arcsecond, 15 at 2 arcseconds and 16.5 at 5 arcseconds, limits that are low enough to detect planets more massive than ~2 MJup with a projected separation of 40-200 AU around a typical target star. More than 300 faint candidate exoplanets were detected around 54 of the 85 stars observed, (see Figure 1) however, follow-up observations at a second epoch have revealed that all of the candidates were unrelated background objects. The observations also resolved three of the target stars into binaries for the first time.

A statistical analysis of the results indicates that the 95% credible upper limit to the fraction of stars harboring at least one planet more massive than 2 MJup with an orbit of semi-major axis in the range 25-420 AU or 50-295 AU is 0.23 or 0.12, respectively. These upper limits, the most precise to date, leave little room for the existence of a swarm of giant exoplanets orbiting their star at distances greater than the size of own planetary system.

More than 200 exoplanets have been discovered over the last decade through precise measurements of radial velocity (RV) variations of their primary star. Notwithstanding its great success in finding planets on small orbits around other stars, the RV technique cannot be used to search for and characterize planets with orbits larger than ~10 astronomical units (AU), i.e. larger than the orbit of Saturn in our solar system. A determination of the frequency of giant planets as a function of orbital separation to hundreds of AUs is necessary to elucidate the relative importance of various modes of planet formation and migration that are currently under scrutiny. This is why direct imaging searches for planets, such as GDPS, are crucial to improve our understanding of the formation and evolution of planetary systems.

Direct imaging is currently the only viable technique to probe for planets that have large orbits around other stars. However, directly detecting giant planets via imaging is very difficult due to the close angular proximity of the central star and the very large luminosity ratios involved: a young Jupiter-mass planet is expected to be approximately 10 million times fainter than its primary star when observed in the near-infrared. Currently, the main technical difficulty when trying to image giant planets directly comes from light scattering by optical imperfections of the telescope and camera that produce bright quasi-static speckles[1] in the image of the of the central star. These speckles are usually much brighter than the planets sought after (Figure 3). The GDPS team developed a special technique, called angular differential imaging (ADI), to suppress these speckles and achieve a greater sensitivity to exoplanets.

ADI consists of acquiring a sequence of many exposures of the target using an altitude-azimuth telescope with the instrument rotator turned off (at the Cassegrain focus) to keep the instrument and telescope optics aligned. This is a very stable configuration and ensures high correlation of the sequence of PSF images. This setup causes a rotation of the field of view during the duration of the sequence. For each target image in such a sequence, it is possible to build a reference image from other target images in which any companion would be sufficiently displaced due to the field of view rotation. After subtraction of the reference image, the residual images are rotated to align their field of view and co-added. Because of the rotation, the residual PSF speckle noise is averaged incoherently, ensuring an ever improving detection limit with increasing exposure time. It has been shown that for ADI with ALTAIR/NIRI on Gemini, the subtraction of an optimized reference PSF image from a target image can suppress the PSF speckle noise by a factor of ~12, and that a noise suppression factor of ~100 is achieved for the combination of 90 such difference images.

[1] Quasi-static speckles are essentially replicas of the ideal stellar image that appear in the vicinity of the star; they arise from small optical defects in the telescope and the instrument. Speckles look very much like thousands of point source companions. Subtracting the speckle pattern is essential for revealing the faint exoplanet signal which is in general much fainter than speckles.

PR Image geminiann07017a
Distribution of distance, spectral type, and age of the 85 target stars of the GDPS 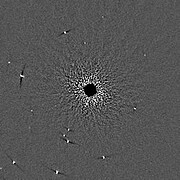 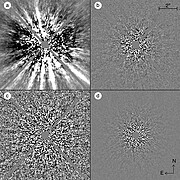