An international team of researchers led by Natalia Boris of the University of São Paulo in Brazil has shown that quasar pairs may be excellent beacons for finding clusters of galaxies in the early universe.

Quasars are relatively rare astronomical objects. If, as evidence suggests, their spatial distribution follows that of galaxies then the presence of two or more quasars in the same small volume of space might indicate a region that is exceptionally rich in galaxies.

Deep multi-color images of four fields around quasar pairs (QP0110-0219, QP1310+0007, QP1355-0032, and QP0114-3140) at redshift z~1 were obtained with the Gemini Multi-Object Spectrograph (GMOS) at both Gemini North and South. The quasar pairs were selected to have redshift differences smaller than 0.01 and projected angular separations less than 300 arcseconds, corresponding to projected physical separations less than 2.5 megaparsecs. Examination of the quasar spectra confirmed that these are bona fide pairs of quasars rather than gravitationally lensed systems.

The GMOS images reveal an overabundance of galaxies in the vicinity of each quasar pair, with three of the four quasar pairs probably residing in rich galaxy clusters. Figure 1 shows the field around the quasar pair QP0110-0219, the richest of the four fields studied. Quantitative analysis of the GMOS image reveals a large excess of galaxies comparable to that found in massive clusters of galaxies at low redshifts. The reddest galaxies appear to have a filamentary-like distribution, typical of clusters in the process of formation. Moreover, Boris and collaborators verified that this quasar pair has been serendipitously detected in X-ray and the observed X-ray flux is consistent with emission from quasars and a possible cluster around them. These results indicate that QP0110-0219 is indeed in a rich cluster.

This discovery suggests that quasar pairs are excellent tracers of dense environments at z ~ 1 and that this same technique might be useful for identifying clusters at even higher redshifts. The next step will be to further confirm the presence of the clusters of galaxies around these four quasar pairs by measuring redshifts of galaxies in the fields. The team is already analyzing spectra of the galaxies around QP0110-0219 and these results confirm their earlier findings. 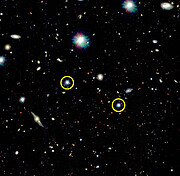