At Gemini the night of July 4th, 2005 was filled with fireworks, both earthly and celestial. In support of NASA’s Deep Impact (DI) mission two teams of scientists used the Gemini mid-infrared instruments MICHELLE and T-ReCS to acquire imaging and spectroscopic observations of Comet Tempel 1 throughout the impact event. At Gemini South a team led by David Osip (Carnegie Inst.) and James De Buizer (Gemini) used T-ReCS to image the impact and the resulting dust plume (Figure 1).

At Gemini North, David Harker (UCSD) led a team that used MICHELLE to obtain mid-infrared spectra Temple 1 over a three-night observing run. The Harker campaign was conducted in conjunction with a team using the mid-IR instrument COMICS on the Subaru telescope. By observing the comet pre-, and post-impact, the Harker team gathered baseline data sets to compare with data obtained during the moments surrounding impact. The results of the campaign are shown in Figure 2. The left column of panels shows the shape of the spectrum in the mid-IR, the middle column shows MICHELLE images of the target during each of the observations, and the right column shows the results of the grain modeling for each epoch. The most dramatic result of the spectroscopy was the evolution of a large silicate emission feature that appeared directly after impact and then slowly faded over the course of several hours. The feature was dominated by emission from amorphous pyroxene, amorphous olivine, and magnesium-rich crystalline olivine. The team also concluded that 10,000 – 100,000 kilograms of dust were released during the impact.

In an upcoming paper slated for October publication in a special Deep Impact issue of Icarus: "Gemini-N mid-IR observations of the dust properties of the ejecta excavated from Comet 9P/Tempel 1 during Deep Impact," the team discusses the spectra extracted by centering on the nucleus, and offset by one arcsecond from the nucleus in the direction of the impact ejecta plume on the night of impact. The cadence of the MICHELLE data enabled the team to perform a time-of-flight analysis of material ejected into the coma as a result of DI. “This is a very unique data set,” said team member Chick Woodward of the University of Minnesota.

The team found small dust grains (~ 0.2 micron) of a diverse mineralogy (amorphous olivine, amorphous pyroxene, amorphous carbon, and crystalline olivine) populating the ejecta. The submicron sized dust grains move faster than the other, larger grains (> 0.7 micron), with amorphous olivine and amorphous carbon traveling together, and amorphous pyroxene and crystalline olivine dispersing at a similar rate. Deriving a velocity law from a time-of-flight analysis, we find that the material traveled with a velocity law scaled by v(0.2 micron) = 220 +/- 20 meters/second and with a power of p = 0.5. This velocity power-law requires a sustained release of grains for the duration of 45 to 60 minutes after impact. Since the mineral species are traveling at different speeds, and there was a sustained release of grains due to a possible "gas-plume", it was concluded that the different minerals did not originate from grain aggregates destroyed by the impact, but instead arise from an inhomogeneous nucleus.

Analysis in the earlier Science Magazine paper by Harker et al., showed that the MICHELLE data was significant in two additional ways. Firstly, the team concluded that a population of small (a < 1 micron) grains was released within minutes of the impact event. The team concluded that these are sub-surface grains, and therefore un-processed by the effects of the sun. Secondly, the model results show that this dust is composed of pyroxene and olivine based silicates. Interestingly, these same compounds are present in the coma of Comet Hale-Bopp. The importance of this is that Hale-Bopp is an Oort Cloud (OC) comet while Tempel 1 is a Jupiter-family (JF) object. JF objects orbit the Sun in the Kuiper belt, a region just beyond Neptune. OC comets live in the Oort cloud, which is several thousand times farther away from the Sun. However, and this is the most intriguing point, the similarity of the spectra of Comet Tempel 1 and Hale-Bopp suggests a common origin for the two comets, or at least that they formed from a common pool of material. This is an astounding finding, since it implies there is a direct connection between OC and JF comets. This is one of the most intriguing results of the ground-based Deep-Impact observing campaign. The Gemini/Deep Impact connection also highlights the synergy between space-based and ground-based observations, a theme that will carry over into the next decade and beyond. 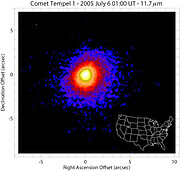 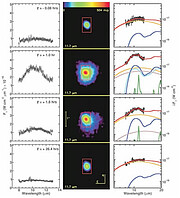