As young stars form and evolve they generate spectacular high-speed jets and outflows consisting of molecular and atomic gas streaming away from the star. It is not completely understood what mechanisms launch these jets. This is partly because most of the action takes place in the inner, difficult to view, regions of the dense gas and dust accretion disk surrounding these forming stars. The best spatial and spectroscopic resolution is needed to dissect this region. A team led by Michihiro Takami (Subaru Telescope, now at ASIAA) and Tracy Beck (Gemini Observatory) have used the adaptive optics fed integral-field spectrograph NIFS on Gemini North to explore the inner structure of the jet in the young star HL Tau, located about 140 parsecs (460 light years) away in the constellation of Taurus.

The morphology and kinematics in molecular hydrogen (H2) emission from HL Tau are found to be similar to millimeter wavelength CO outflows. It is far less collimated than the collimated jet seen in the [Fe II] emission (Figures 1 and 2). The H2 emission is partially associated with cavity walls of the evacuated region, as observed in several CO outflows. However, it is striking how much smaller the H2 flow of HL Tau is when compared to a typical CO outflow which often extend to over 1000 - 10,000 astronomical units (AU). The H2 flow in HL Tau shows a spatial scale of only about 150 AU, or about twice the size of our solar system.

Also, the H2 emission has a remarkably different geometry and kinematics from the [Fe II] emission of the jet, and there is no sign of interaction between the two. Instead, the jet appears to be surrounded by an unseen broad (wide angle) wind. A simple description is that the latter interacts with the ambient gas of the accretion disk, excavating a bipolar cavity and inducing shocked H2 emission.

The authors of the NIFS study predict that some of the arc-like features will change significantly over the scale of few years. Periodic monitoring, spread over several years, will allow observations of these motions and improve estimates of the dynamical age which, in turn, will lead to better estimates of the duration of this critical phase in young star evolution. 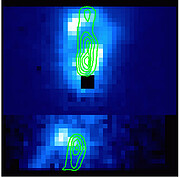 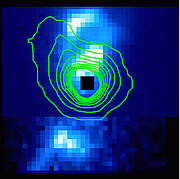