In a paper appeared in the May 1, 2006 Astrophysical Journal Letters, Gemini astronomer James De Buizer, offers a caution that mid-infrared emission from young stellar objects can be explained by processes other than circumstellar disks.

The Gemini observations were focused on a young massive star in the G35.20-0.74 region in the outskirts of the Serpens constellation 7500 light years away. This young star has a known collimated outflow, which was first detected from its radio emission (white contours in Figure 2b). The new observations reveal a monopolar jet-like feature in the mid-infrared (Figure 2a). It is argued that this is thermal continuum emission from dust associated with the outflow.

In this case the young star is deeply embedded in a molecular clump, and therefore only the northern jet of the outflow, which is coming out of the cloud toward us, can be viewed in the mid-infrared. The southern part of the outflow can be seen in the radio image because, unlike mid-infrared emission, radio emission can penetrate through the dense molecular cloud.

The Role of Disks and Jets in Massive Star Formation

Astronomers think that stars like our Sun form at the centers of disks of swirling gas and dust. These disks feed these young stars, allowing them to eventually grow to their final size. However during this circumstellar disk phase, some material is actually expelled from the system perpendicular to the disk in an outflow (Figure 1).

A newly forming star heats its nearby dust, and this dust radiates that heat away as mid-infrared emission. For that reason it has been traditionally thought that mid-infrared emission is produced by the hot dust in the circumstellar disks that are suspected to form around every young star as a natural consequence of their formation process. Unexpectedly, for G35.20-0.74 it is the outflow that dominates the mid-infrared emission.

While there have been a few previous observations that have detected mid-infrared emissions from outflows, it was thought that they were dominated by shock lines of molecular hydrogen. However, these Gemini mid-infrared observations were taken through filters that did not encompass any molecular hydrogen lines. Moreover, because of the steep spectral slope from 3 to 18 microns it was concluded that the mid-infrared radiation from the outflow is dominated by continuum dust emission.

“Not only was it determined that here we are seeing an outflow dominated by mid-infrared continuum emission, but it is now suspected that the masers here are most likely associated with the outflow as well,” said De Buizer.

Masers are molecular lasers that naturally occur in space, and are often associated with star formation. In some cases, especially cases involving molecular methanol masers, they are thought to be emitted from circumstellar disks. However, with the help of the new Gemini observations it is now argued that the all of the masers in the region are associated with the outflow and emitted from the walls of the outflow cavity (Figure 2c).

“Methanol masers require mid-infrared emission to excite them to emit,” said De Buizer. “Here we see clearly for the first time that the outflow cavities close to newly forming stars are bathed in mid-infrared radiation, and may therefore be natural environments for methanol maser production.”

These Gemini observations demonstrate the importance of high spatial resolution, multiple wavelength observations in deciphering the true nature of complex star forming regions. De Buizer added, “We often find that things are not what we expected.” 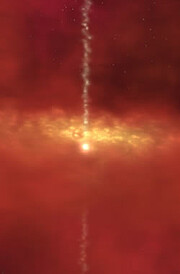