A U.S.-led team of astronomers, led by Keivan Stassun of Vanderbilt University, has used Gemini South's high-resolution infrared spectrograph PHOENIX to uncover the dynamics of the eclipsing brown dwarf pair 2MASS J0532184-0546085. The observations of the pair, in the Orion Nebula, complemented data from the 0.9-meter telescope at Kitt Peak and the 0.9-meter, 1.0-meter and 1.3-meter telescopes at the Cerro Tololo Inter-American Observatory.

The findings show that the radii of the failed stars are quite large (as models predict), but that the least massive of the pair is hotter than the larger partner. The temperature observations are contrary to expectations.

The Gemini data consists of a suite of high-resolution spectra made from eight observations between December 2002 and January 2003. This allowed the team to sample the velocities of the two objects throughout their entire orbital phase.

This is the first direct, accurate measurements of the physical properties of young brown dwarfs. By measuring the radii, masses and luminosities Stassun et al. have provided a unique and fundamental contribution to our understanding of brown dwarfs.

The data sets have a spectral resolution of ~30,000, which allowed the team to measure the radial velocity (motion toward or away from us) of both brown dwarfs down to +/- 2 kilometers per second. The observations furnished a key piece of information that, when added to the light curve measurements from the other telescopes, gave the team members what they needed to determine the final orbital solution of the system.

The result appears in the March 16th, 2006 issue of Nature and is featured in a press release from Vanderbilt University (requires FLASH® plug-in). The team included Robert Mathieu of the University of Wisconsin-Madison and Jeff Valenti of the Space Telescope Science Institute. 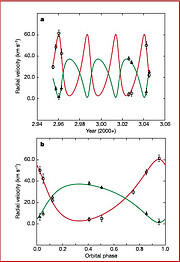