Kevin Luhman (Harvard-Smithsonian Center for Astrophysics), Dawn Peterson (University of Rochester) and S. T. Megeath (also CfA) used the newly commissioned Gemini Near Infrared Spectrograph (GNIRS) on Gemini South to determine the nature of the low-mass object OTS 44. The observations of the faint infrared object confirmed that it is a very low-mass, newborn brown dwarf and the lowest mass brown dwarf found to date in the Chamaeleon I cloud complex. The Camaeleon I cloud complex is a nearby star-forming region located about 170 parsecs (554 light-years) away from us toward the constellation of Chamaeleon.

From the strength of the water vapor (steam) absorption band around 1.5 and 2 microns, and in comparison to other low-mass stellar objects, the team determined OTS 44 to be of very late spectral type M9.5 (geminiann04018a). They estimate its effective temperature at 2300 K. Using the flux in the H band and the object’s distance, Luhman and his team derived a bolometric luminosity of almost 800 times less than our Sun. Models of low-mass stars were used to infer the mass of OT 44 at about 1.5% the mass of the Sun and about 15 times the mass of Jupiter (geminiann04018b). Unlike older brown dwarfs (which have smaller sizes, as indicated in the box to the right), this young object is relatively large with a radius of about 1/4 that of the Sun or 2.5 times that of Jupiter.

The team’s GNIRS observations were conducted as part of a system verification program. GNIRS was built by NOAO and delivered to Gemini South in late October 2003. Commissioning of the R=1700 and 5900 long slit and R=1700 cross-dispersed modes as well as the Integral Field Unit was completed in early 2004. Other modes are currently being commissioned. See the GNIRS Homepage for more details.

These observations were complemented by data from the infrared spectrograph Spex at the NASA Infrared Telescope Facility on Mauna Kea. 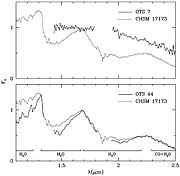 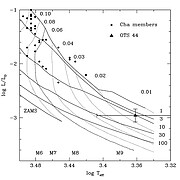 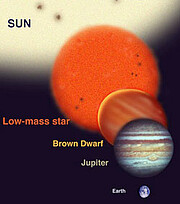