Eight meter-class telescopes such as Gemini, the Very Large Telescope (VLT), Subaru and Keck have opened up the high-redshift universe for detailed study. Several galaxies out to redshifts of z ~ 6.6 are now known and Gemini has played a significant role in their discovery: "Searching for the end of the cosmic dark ages with GMOS", "Gemini Probes Galaxy Evolution a Billion Years After the Big Bang". Finding even more distant galaxies is particularly important to our understanding of the formation of the very first stellar objects in the history of the universe, and of the ensuing reionization of the intergalactic medium. This epoch of “first light” at redshifts between ~7-15 marked the end of the early universe’s dark ages – a time when the universe was filled with mostly neutral hydrogen.

Recently, Pelló et al. (Astronomy and Astrophysics, vol. 416, p. 35, 2004) identified a possible highly magnified object which they interpreted to be a Lyman break galaxy at z=10. A major part of the case that this object is at z = 10 was the presence of a strong continuum break between the J and H bands, attributed to absorption of all continuum shortward of 1216 Å in the rest frame of the object. The object was not detected in V, R and I optical bands and was formally only detected at more than 4 sigma in H (HAB = 25.00 +/-0.25) and about 3 sigma in K (Ks,AB = 25.51 +/-0.36). The J-band detection quoted by Pelló et al. was JAB = 26.8 +/-1.0. They also observed an emission line in the spectrum of the object, which they interpreted as Lyman alpha at a redshift of z=10 because of the break between the J and H bands.

An international team led by Malcolm Bremer (University of Bristol, UK) and including Joe Jensen (Gemini Observatory) used the Gemini North Near Infrared Imager (NIRI) to obtain even deeper H-band images of the field of the possible z=10 galaxy.

The observations were made on 30 May and 6 June 2004 at Gemini North, when Bremer’s team imaged the field at H with NIRI to better constrain the photometry and morphology of the object. The Gemini image is significantly deeper than the existing H-band image obtained with ISAAC on the Very Large Telescope (Pelló et al. 2004). The object is not detected in the Gemini data (Figure 1). The object should have been detected at more than ~7 sigma in a 1.4” diameter aperture. This non-detection by Gemini means there is no evidence for a break between the J and H bands and consequently casts significant doubt on the reality of the z=10 galaxy.

Other independent work has recently thrown doubt on the reality of the spectral line in the ISAAC/VLT spectrum. Taken together with the Bremer et al. work, the reality of any source at this position has to be strongly questioned. Even if the emission line is real, it is more likely to be something other than Lyman alpha. For example, it is entirely possible that it could be the brightest line (eg [OII]3727, [OIII]5007, H-alpha) emitted by a low surface brightness star forming galaxy at 1.0<z<2.6. Such a galaxy could well be too faint to detect in the published optical imaging. The conclusion is that the purported ISAAC object is not a Lyman-break galaxy at z=10, and quite possibly nothing at all… 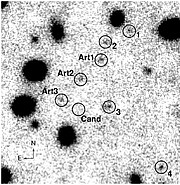