Over the past few years, a more coordinated approach to the building and using of new instruments for very large telescopes has gained strong support among science policy makers and, increasingly, among scientists themselves. In this spirit, we are pleased to announce that Gemini and Keck have agreed to exchange five nights of observing time at each facility in semester 2005A. The Gemini user community will have access to five nights of HIRES, the optical high-resolution spectrograph on Keck I. In return, Keck users will have access to the mid-infrared imager/spectrograph MICHELLE on Gemini North for five nights. The nights will be "classically" scheduled.

Gemini's MICHELLE is a mid-infrared (8-25 micron) imager and spectrometer. In its spectroscopic mode, MICHELLE allows observations with resolution of R = 200, 1000, 3000 and 20,000 at 10 and 20 microns. MICHELLE was recently re-commissioned on Gemini North after being on UKIRT for much of semester 2004A. MICHELLE is now permanently based at Gemini.

"The successfully commissioning of Michelle on Gemini will give our communities unsurpassed access to high resolution spectroscopy in the thermal infrared," said Gemini Director Matt Mountain. "This capability will allow Gemini astronomers to probe the obscured regions where stars form and dissect the chemistry and dynamics of the early epochs of planetary system formation with a depth and angular precision that will be unsurpassed until the launch of the James Web Telescope in the early part of the next decade."

Keck HIRES is a visible wavelength echelle spectrograph with grating cross-dispersion spectroscopy capable of achieving resolutions or R = 30,000 to 80,000. An upgrade of the HIRES CCD was recently completed with first light on August 18, 2004. The new CCD nearly doubles the amount of spectral information recorded in a single exposure, it also gives HIRES a sensitivity to ultraviolet light unsurpassed by any other similar spectrograph on any telescope in the world. HIRES is also able to sample spectra in sufficiently fine detail to detect Neptune-sized planets around other stars for the first time.

Following "First-Light" with brand new CCD detectors on HIRES on 18 August 2004, W.M. Keck Observatory Director, Fred Chaffee said, "only time will tell what new discoveries will emerge from the new HIRES detector capability, but last night opens a new era of possibility for this workhorse instrument. Already, test exposures of a star, a supernova, and two quasars have been provided to Keck scientists eager to see the quality of these new data."

See the upcoming Gemini Call for Proposals (on the Keck and Gemini websites), to be released 1 September 2004, for further details and application procedures.

Exchange of telescope time between large astronomical facilities represents a paradigm shift for astronomers. Gemini North Associate Director, Jean-Rene Roy believes, "...a federated approach to the use of the most advanced facilities on the most powerful telescopes on earth will lead to unique science results and enable new collaborations. This new paradigm represents not only a more efficient way to use our resources but is likely to strengthen the competitiveness of astronomical research with respect to other fields. By breaking some of the existing borderlines and barriers between our research centers, we hope to foster a more productive science environment. The Gemini-Keck time exchange is a first step toward establishing a more unified "market" for forefront astronomical research while allowing better coordination between research efforts and investments." 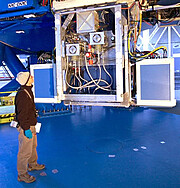