Verne Smith of the University of Texas El Paso led an international team of American, Canadian, Brazilian and Japanese astronomers to a detailed study of the physical properties of the recently discovered nearby brown dwarf companion to Epsilon Indi, the fifth brightest star of the southern hemisphere constellation Indus.

This T-dwarf star was discovered at Gemini South by Kevin Volk et al (2003) to be a close optical double consisting of an early T dwarf (Epsilon Indi Ba) and a late T dwarf (Epsilon Indi Bb) separated by 0.6 arcsec - see previous announcement, "Gemini Detects Something "Cool" in Our Neighborhood". With an accurately known distance of 3.626 +/- 0.009 pc, Epsilon Indi Ba and Bb are the nearest known brown dwarfs.

The properties of Epsilon Indi Ba were explored by comparing the PHOENIX spectra to the computer generated synthetic spectra from model atmospheres (Figure 1). These models are so called "unified cloudy models" in which dust is allowed to exist in the atmosphere of the brown dwarf over a limited range defined by a condensation temperature and a critical temperature. This technique reproduces the complex physical state of the atmospheres of brown dwarfs; they have "weather" driven by dust condensation and a complex circulation pattern. By matching the shape and the depth of the absorption lines of 12C16O and H2O, the researchers derived an effective temperature of 1500K, a surface gravity of log g = 5.2 (almost 6 times the surface gravity of the Sun). From the luminosity derived by Scholz et al (2003) of log (L/Lsun) = -4.71 (i.e. 30,000 times fainter than the Sun), Smith et al were able to determine that the mass of Epsilon Indi Ba is M = 32 MJupiter

Numerical fits to the line profiles (primarily the strong CO lines) yield the projected rotational velocity of 28 km/s. This implies a maximum rotational period for Epsilon Indi Ba of 3.0 hours, more than three times that of Jupiter (which has the fastest rotation rate of any planet in our solar system with a period of 9h 50m). Jupiter and Epsilon Indi Ba probably have similar diameters, hence Epsilon Indi Ba must be significantly flattened by its fast rotation.

This work in described in details in the paper "High-Resolution Infrared Spectroscopy of the Brown Dwarf e Indi Ba", by Verne V. Smith et al to appear in The Astrophysical Journal Letters, December 20, 2003.

Interested readers should also be aware of the very thorough study by the ESO team of McCaughrean, Close, Scholz et al., who discovered Epsilon Indi B in December 2002 and independently discovered Eps Indi Bb. They present near-IR adaptive optics imaging and spectroscopy obtained with the NACO system at the VLT in "Epsilon Indi Ba/Bb: the nearest binary brown dwarf", in press in Astronomy & Astrophysics. 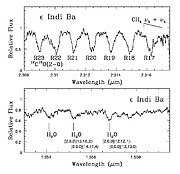