Both CIV (at 1549 Angstroms) and CIII] (1909 Angstroms) were detected in the quasar at a redshift of z = 5.774 +/- 0.003 (See Figure 2). The new redshift derived from these lines is more accurate than the previous optical estimate (z=5.82), based on a single broad line, Lyman alpha (See Figure 1). Because of its high redshift and foreground absorption by our own galaxy, the quasar is invisible at optical wavelengths. This quasar is among the most distant X-ray sources currently known and is the most distant catalogued radio source.

In addition to the spectral lines of carbon, lines of other heavy ions such as nitrogen, oxygen, and silicon are observed in the spectrum of this distant quasar. This is remarkable, because the emission-line gas of quasars seen when the Universe was less than one billion years old (less than one tenth its present age), has a heavy element content similar to that of low-redshift quasars. This implies substantial processing of primordial hydrogen and helium at even this early epoch.

The most striking aspect of SDSS J0836+0054 is its red color. The spectrum has a spectral slope redder than 94% of the 4576 quasars compiled from the SDSS. Reddening by dust in the environment of the quasar is the obvious explanation, implying substantial dust production at an early cosmic epoch.

FLAMINGOS is a fully cryogenic Near-Infrared Multi-Object Spectrometer built by the University of Florida by Project Scientist Richard Elston. It achieves spectral resolving powers of R=450 for 0.5" slits covering either the J+H or H+K windows simultaneously. FLAMINGOS was built with support from the National Science Foundation. 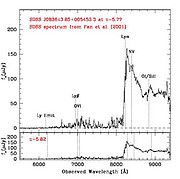 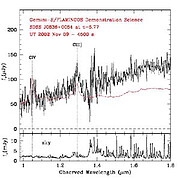