High spatial resolution NIRI images taken in the 1.69-micron methane absorption band expose the detailed structure and varying chemistry of the clouds high in the Jovian atmosphere. The image of Jupiter was obtained as part of a systems check for the Gemini Near-Infrared Imager (NIRI) and was also used for a contest in which a Canadian elementary school student selected Jupiter as a target for Gemini. The Canadian Gemini Office located at the Herzberg Institute of Astrophysics in Victoria, BC, together with the Canadian Gemini Scientist sponsored a contest for Canadian school children. The aim was to make students more aware of astronomy in general and the Gemini Observatory in particular. Each entrant submitted a short paragraph on their favorite object in the sky and the winners were selected on the basis of the originality of the object and the reasons why it was their favorite celestial object. Two prizes were awarded one for elementary school children and one for those in high school. The prize in both cases was an image of their object specially obtained for them by the Gemini staff with one of the 8-meter telescopes. The high school winner was Tracy Falukozi from Calgary for her entry "The Cat's Eye Nebula", while the elementary winner was Julian Trombinski from East Selkirk near Winnipeg for his entry on "Jupiter".

The planet Jupiter has dozens of very small, faint moons that have been discovered in recent years. The Gemini 8-meter telescope has been used to measure the properties of these moons by determining their infrared brightness. In preparation to observe the very faint moons, Gemini astronomers needed to make sure the telescope was tracking Jupiter properly because all of the planets move at varying rates against the background stars. This image of Jupiter was taken as a quick check of all telescope systems before observing the faint moons, which might not be obvious in individual short exposures.

Jupiter was imaged at a wavelength of 1.69 microns using the Gemini Near-Infrared Imager (NIRI) on December 13, 2002 at 16:00 UT. This image is a combination of 20 individual 0.4-second exposures, which together make the equivalent of an 8-second exposure. Additionally, three 8-second frames were collected within a few minutes. The rotation of Jupiter is clearly apparent when the individual frames are animated. Jupiter's period of rotation (its day) is less than 10 hours long. The resolution in this exposure is 0.35 arcseconds (without adaptive optics correction) and shows the excellent image quality delivered by the Gemini telescope and NIRI.

Two of Jupiter's Galilean moons are visible in this image as well: Europa is the bright "star" to the right of Jupiter, and Io is the bright spot projected against the equatorial cloud bands towards the right edge of the disk. They can be seen to move in their orbits in the animation.

Methane gas strongly absorbs infrared light with a wavelength of 1.69 microns. Thus, the darker regions in this image are areas in the Jovian atmosphere that are rich in methane. Dr. Tobias Owen (University of Hawaii Institute for Astronomy) explains that the bright areas, particularly near the equator, are regions where high ammonia cirrus clouds block our view of the lower atmosphere. The Great Red Spot (the white oval at lower left in this false-color image) is a cyclonic storm system, which extends well above the surrounding cloud tops. The nature of the bright haze near the poles is still not well understood, but is probably composed of complex organic compounds produced by the intense shower of charged particles trapped in Jupiter's strong magnetic field. 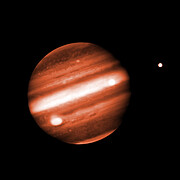