In 1943 the American astronomer Carl K. Seyfert reported that a small percentage of galaxies have very bright nuclei that are the source of broad optical emission lines seen in their spectra. Nearly stellar in appearance, these nuclei are responsible for the emission of strong lines produced by atoms in a wide range of ionization stages. Today these objects are known as Seyfert Galaxies and the spiral galaxy NGC 4151 is a good example of this type of object. Seyfert Galaxies belong to a broader class of objects called Active Galactic Nuclei (AGN) that are characterized by energetic emission across the entire electromagnetic spectrum, from the radio to X-rays. The power source for an AGN is thought to be a central supermassive black hole where energy is generated by matter accreting onto the black hole itself and onto its surrounding accretion disk.

James Radomski of the University of Florida and his collaborators used the mid-infrared camera OSCIR mounted on Gemini North to observe the nuclear region of NGC 4151 at the wavelengths of 10.8 and 18.2 microns. At a distance of 13.2 Mpc (42 million light years) NGC 4151 harbors one of the nearest and best-studied active galactic nuclei. Indeed, monitoring of NGC 4151 has shown that its AGN is highly variable in both continuum and line emission. The mid-infrared emission of NGC 4151 has been suggested to arise from either thermal emission from dust grains or synchrotron emission.

The Gemini observations conducted by Radomski et al. show that the mid-infrared emission in NGC 4151 is compact but resolved. It extends ~3.5 arcseconds, or 200 pc, across the nucleus at a position angle that matches the narrow line region as observed in the optical at [OIII]5007 by the Hubble Space Telescope (Figure 1). The most likely explanation for the extended nature of the mid-infrared emission is that the central engine is heating dust in the narrow line region. The authors find no extended emission associated with the proposed central torus and are able to place an upper limit of < 35 pc on its mid-infrared size. The fact that the elongated shape of the mid-infrared emission is coincident with the emission seen in the optical, radio, and X-rays (Figure 2) seems to confirm that the high energy radiation emitted by the black hole is collimated into a narrow beam that illuminates gas and dust lying in certain quadrants of the central region of the galaxy.

The University of Florida developed the mid-infrared camera OSCIR with support from NASA and the National Science Foundation. 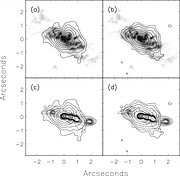 PR Image geminiann03010a
Contours of the nuclear region of NGC 4151 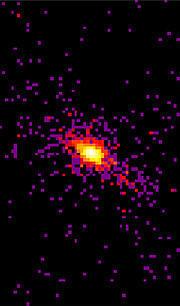