The Large Magellanic Cloud, a small satellite galaxy at a distance of about 50,000 parsecs, is a prime target in which to probe the chemical evolution of stars. Because this galaxy has a different star formation history than our own galaxy, the properties of its stars are different. Variations in galaxy evolution can lead to differences in chemical composition, which result in stars that noticeably differ in the later phases of their evolution. Measuring and understanding these chemical differences help unravel the physics of the complexes processes of nuclear burning and mixing that take place in the red giant and later phases.

Within a given stellar population in a galaxy, chemical evolution is driven primarily by stellar nucleosynthesis, with the dispersal of the processed material back into the galactic interstellar medium (ISM). This heavy-element enrichment over time depends on such processes as star formation history, internal stellar evolution and nucleosynthesis as a function of mass, how stars return their process ejecta back into the ISM, and whether some of the stellar ejecta can be lost from the galaxy by galactic winds.

Comparing the red giants of the Large Magellanic Cloud with those of our galaxy is of obvious value. However, because the red giants within the LMC are faint due to their greater distance, detailed infrared spectroscopy of them has only become possible with the advent of large 8-10 m telescopes like Gemini equipped with high resolution spectrographs.

Using the high resolution infrared spectrometer PHOENIX on Gemini South, Verne V. Smith (University of Texas, El Paso) and a large international team have determined the abundances of the isotopes 12C, 13C, 14N and 16O along with the abundances of Fe, Na, Sc and Ti in 12 red giant stars spanning masses between 1-4 Msun . This range of star masses in the Large Magellanic Cloud is significantly lower than the range studied previously (8-10 Msun). This deeper exploration has been allowed by the unique combination of PHOENIX and the large aperture and fine image quality of the Gemini South Telescope.

The dependence of the ratio of oxygen to iron ([O/Fe]) on the global heavy element content ([Fe/H]) of stars is crucial in establishing star formation histories of stellar populations in differing environments. Oxygen is made during the late stages of evolution of the most massive stars, while iron comes from both massive, core-collapse (high mass) supernovae (SN II) and binary type Ia (low mass) supernovae (SN Ia). Hence, the run of the O/Fe ratio as a function of Fe/H in a stellar system is a measure of the history of SN II to SN Ia rates, and, hence of the star formation history of the LMC. 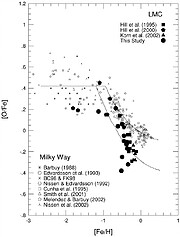