From the Milky Way Suburbs to the Edge of the Universe

This deep image obtained with the Gemini Multi-Object Spectrograph with the Gemini North Telescope shows a dramatic view of the universe as it can be revealed by the new generation of large ground-based telescopes.

Not unlike the Hubble Space Telescope which is unhindered by the Earth's atmosphere, the present generation of very large ground based telescopes allows a unique view of the universe going from within our galaxy (by probing the faintest stars of the Milky Way) to the edge of the universe (like the central green object of this image which is probably at more than 10 billion light years away). Most of the galaxies appear faint because their light has come from so far that it traveled for much of the age of the universe. Many of these giant stellar systems, spirals and ellipticals, are as large and even larger than our own Milky Way with total masses corresponding to several hundred billion times the mass of our Sun. Some of the smallest and faintest objects are probably galaxies being formed by the spontaneous coalescence of massive volumes of gas or by the merging process of several proto-galaxy units falling onto each other. By studying objects like these, scientists can piece together the evolution of galaxies from their formation early in the universe.

Gemini Observatory recently released this unique set of deep optical images obtained several months ago during the commissioning and system verification phase of GMOS, the Gemini Multi-Object Spectrograph. The Gemini Deep Field is centered on the z=4 quasar QSO PMN2314+0201. The final image is the result of a combination of several frames taken with g', r' and i' filters. The colors represented in this image indicate the different ages of stars within the galaxies as well as the stretching of light toward the red end of the spectrum as it travels across the expanding universe. Because of the filters used, and the fact that this is an RGB composite image, the quasar and some other red objects appear green. This image will be used to identify objects for which spectroscopy will be later obtained on Gemini. The large 8-10m class ground-based telescope can deliver much deeper (x10) spectroscopic data than HST that is limited by its 2.4 m aperture. 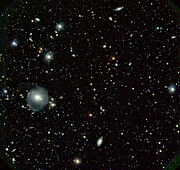