On Monday afternoon, June 10, Big Island residents had the opportunity to safely view a partial solar eclipse where the Moon covered about half the Sun's surface.

The public was invited to attend a Family Astronomy Afternoon to view the partial solar eclipse from 1 to 4 p.m. at the Gemini Observatory headquarters at University Park on the upper campus of the University of Hawai'i at Hilo (off Komohana).

"This is a unique opportunity to view a partial solar eclipse and view the Sun safely through a telescope," said Dr. Richard Crowe, Professor of Astronomy at UH-Hilo. "I anticipate that we will also have some nice views of sunspots, if Hilo's weather cooperates."

The event was jointly sponsored by the Hilo Astronomy Club, the UH-Hilo Department of Astronomy and the Gemini Observatory.

At its maximum coverage, which occured in Hilo at 2:47 p.m., the Moon hid almost exactly half the Sun's surface as viewed from our island. The silhouette of the Moon on the Sun first became visible in Hilo at 1:17 p.m. and the eclipse ended at 4:10 p.m.

Gemini personnel, astronomy club members and volunteers representing the UH-Hilo astronomy department were on hand to help both children and adults safely view the eclipse through several large portable telescopes adopted for looking directly at the Sun. Members of the Hilo Astronomy Club also provided demonstrations on how families can safely view an eclipse through the use of such homemade solar observing devices as a "pinhole projector," constructed from a cardboard box and white paper.

"This partial eclipse is a not-so-common event," said Hilo Astronomy Club President Dave Brennen. "Such a public opportunity to see a partial solar eclipse while at the same time viewing the Sun through a relatively powerful telescope doesn't happen very often."

The afternoon's events also featured behind-the-scenes tours of the Gemini North headquarters and the Observatory's high-tech Control Room. Ongoing interactive presentations on infrared astronomy, recent discoveries and some of the technologies used at the Gemini Observatory were displayed.

One notable feature of this partial eclipse - although this aspect was not visible in Hawai'i - is that it is what is known as an "annular eclipse." An annular eclipse occurs when the Moon is farther away from the Earth than on average, as it was on June 10. This means the Moon's apparent disk is slightly too small to totally obscure the disk of the Sun. This leaves a bright ring of light around the blackness of the Moon's disk which is known as the "Ring of Fire," and is quite beautiful. Annular eclipses are so-named because the word "annular" is derived from the Latin word "anulus", meaning "ring".

Only a tiny portion of the world had the opportunity to view this unique "Ring of Fire" phenomenon on June 10th. The "window" for seeing the annular aspect of this eclipse ran almost exclusively across empty stretches of the Pacific Ocean. This "Ring of Fire" viewing path - unfortunately for Hilo - passed approximately 1,800 miles north of the islands. But viewers here were able to see the partial eclipse and other interesting solar phenomena such as sunspots.

The Gemini Observatory is an international collaboration that has built two identical 8-meter telescopes. The telescopes are located at Mauna Kea, Hawai'i (Gemini North) and Cerro Pachón in central Chile (Gemini South), and hence provide full coverage of both hemispheres of the sky. Both telescopes incorporate new technologies that allow large, relatively thin mirrors under active control to collect and focus both optical and infrared radiation from space.

The Gemini Observatory provides the astronomical communities in each partner country with state-of-the-art astronomical facilities that allocate observing time in proportion to each country's contribution. In addition to financial support, each country also contributes significant scientific and technical resources. The national research agencies that form the Gemini partnership include: the US National Science Foundation (NSF), the UK Particle Physics and Astronomy Research Council (PPARC), the Canadian National Research Council (NRC), the Chilean Comisión Nacional de Investigación Cientifica y Tecnológica (CONICYT), the Australian Research Council (ARC), the Argentinean Consejo Nacional de Investigaciones Científicas y Técnicas (CONICET) and the Brazilian Conselho Nacional de Desenvolvimento Científico e Tecnológico (CNPq). The Observatory is managed by the Association of Universities for Research in Astronomy, Inc. (AURA) under a cooperative agreement with the NSF. The NSF also serves as the executive agency for the international partnership. 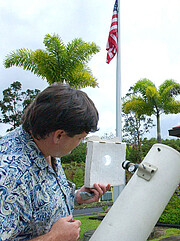