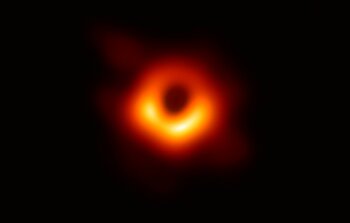 noaoann19017 — Announcement
2020 Breakthrough Prize Awarded to Event Horizon Telescope Team
5 September 2019: The 347-person team that made the first image of a supermassive black hole has been awarded the Breakthrough Prize in Fundamental Physics, one of the “Oscars of Science.” By synchronizing 8 radio telescopes, the team created a virtual telescope the size of the Earth, with a resolving power never before achieved from the Earth’s surface. One of their first targets was the supermassive black hole at the center of the galaxy M87. NOAO Astronomer Tod Lauer is a member of the Event Horizon Telescope team.
Read more 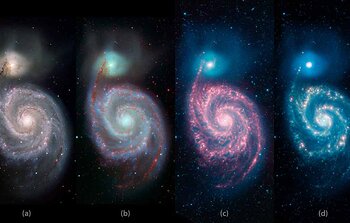 noaoann19016 — Announcement
A Whirlpool Warhol
8 August 2019: It all depends on how you look at it—galaxies appear different in visible light (i.e., wavelengths that our eyes are sensitive to) than at longer wavelengths, in the infrared. In visible light (panel a), the Whirlpool galaxy M51 and its companion show fine filigree dust lanes that obscure and redden the light from background stars. In the infrared (panels c and d), the dust lanes, warmed by starlight, glow brightly. Panel b combines the visible light image, taken at the Kitt Peak 2.1m telescope, and the infrared images from NASA’s Spitzer Space Telescope.
Read more 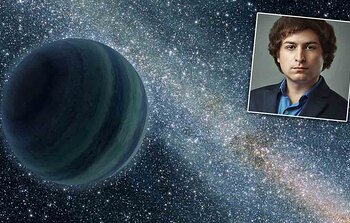 noaoann19015 — Announcement
What’s Your Moonshot?
1 August 2019: To celebrate the 50th anniversary of the moon landing, Newsweek is highlighting pioneers in science and technology, their moonshots, and how they hope to change the world. This week’s issue features NOAO Astronomer Aaron Meisner, who describes the inspiration behind the Backyard Worlds citizen science project he helped create and how it brings the human element back to the exploration of big data sets.
Read more

noaoann19014 — Announcement
Day into Night
17 July 2019: On 2 July 2019, a total solar eclipse passed over Chile and Argentina. Through a stroke of astronomical luck, the path of totality crossed directly over the National Science Foundation’s (NSF) Cerro Tololo Inter-American Observatory (CTIO) located in the foothills of the Andes, 7,241 feet (2200 meters) above sea level in the Coquimbo Region of northern Chile. During two minutes of totality, starting at 4:38 p.m. ET, the day turned into night when the moon completely covered the sun.
Read more 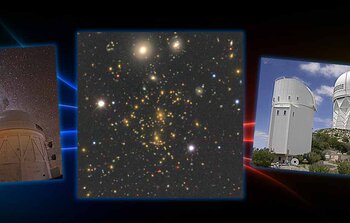 noaoann19013 — Announcement
New Sky Surveys Set the Stage for Dark Energy Experiment
9 July 2019: Three new imaging surveys pave the way for an upcoming spectroscopic experiment, the Dark Energy Spectroscopic Instrument (DESI), which will explore the role of dark energy in the expansion history of the Universe. Images from the surveys, which were carried out with the Mayall and Bok telescopes at KPNO and the Blanco telescope at CTIO, can now be explored from the comfort of your browser for a virtual tour of the cosmos!
Read more 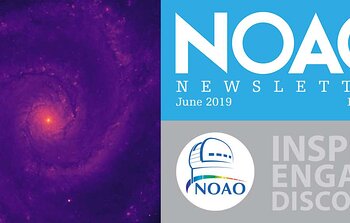 noaoann19012 — Announcement
June 2019 NOAO Newsletter
7 June 2019: The June 2019 NOAO Newsletter is online and ready to download. It contains sections on Science Highlights, Community Science & Data, System Observing, and NOAO Operations & Staff. On the Cover First Light image (of M51) with the new DESI Corrector Assembly (CA) on the Mayall 4m telescope on Kitt Peak. The CA consists of four ~1m diameter lenses and a two-element atmospheric dispersion corrector, as well as the hexapod, used for fine-motion and focus control of the CA. The image was made with the Commissioning Instrument, composed of five CCD cameras temporarily installed in the DESI focal plane.
Read more 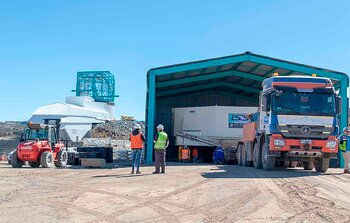 noaoann19011 — Announcement
LSST Mirror Arrives at Cerro Pachón
14 May 2019: The 8.4m-diameter primary mirror of the Large Synoptic Survey Telescope (LSST) has reached its home at Cerro Pachón in Chile. Earlier this month, the mirror reached the port at Coquimbo, where it was loaded onto a 72-wheeled transport vehicle for the trip to the summit. The trip included passage through the tunnel at Puclaro Dam, with just inches to spare on either side. In a survey set to begin in 2022, LSST will scan the entire visible sky every few nights for 10 years, opening a new window on the changing Universe.
Read more 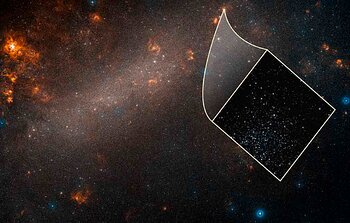 noaoann19010 — Announcement
Mystery of the Universe’s Expansion
2 May 2019: New results from the Hubble Space Telescope confirm that the Universe today is expanding faster than expected, based on how the Universe appeared 13 billion years ago. Possible explanations for the discrepancy include a surprise appearance of dark energy in the young Universe (“early dark energy”) or that the Universe contains a new subatomic particle that travels close to the speed of light (“dark radiation”). The development relies on an earlier study of Cepheid variable stars carried out with the SMARTS 1.5m telescope at CTIO.
Read more 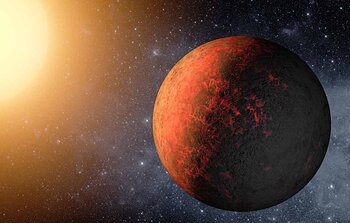 noaoann19009 — Announcement
Two New Planets Discovered Using Artificial Intelligence
22 April 2019: Using an artificial intelligence algorithm to sift through massive amounts of data from NASA’s Kepler Space Telescope, a team of astronomers, led by an undergraduate at UT Austin, has discovered two new exoplanets. The planets are “super-Earths” — planets about twice the size of Earth—that orbit very close to their stars. With orbital periods of 13 days and 2.5 days, each day on these planets is a scorcher! NOAO astronomer Mark Everett is a member of the discovery team.
Read more

noaoann19008 — Announcement
Seeing the ‘Unseeable’
10 April 2019: Observations made with the Event Horizon Telescope, a planet-scale array of eight ground-based radio telescopes, have captured the first picture of a supermassive black hole. The black hole appears as a bright ring as it gravitationally bends the light around it into a bright ring that surrounds the black hole's dark shadow. The black hole in this portrait resides at the center of the galaxy M87, which lies at the heart of the Virgo cluster of galaxies, 55 million light years from Earth. NOAO Astronomer Tod Lauer is a member of the EHT research team, and works closely with the University of Arizona EHT group led by professors Dimitrios Psaltis and Feryal Ozel.
Read more 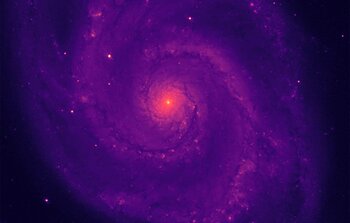 noaoann19006 — Announcement
5000 Robots Merge to Map the Universe in 3D
20 March 2019: How do you create the largest 3D map of the Universe? You need to study 10s of millions of galaxies! To accomplish that Herculean task, the Dark Energy Spectroscopic Instrument (DESI), which is being installed on the Kitt Peak Mayall telescope, will use an array of robot fiber-positioners that will automatically swivel into position to capture the spectra of 5000 galaxies at a time. This video describes how scientists working at Berkeley Lab are assembling the array of robots and their related electronics.
Read more 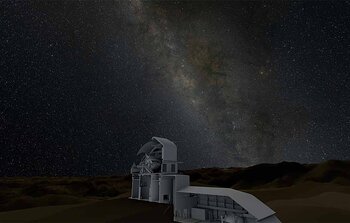 noaoann19005 — Announcement
A Virtual Tour of the Large Synoptic Survey Telescope
6 March 2019: Currently under construction at Cerro Pachon in Chile, the Large Synoptic Survey Telescope (LSST) is at the vanguard of the next generation of wide-field surveys of the sky. Capable of imaging a huge swath of sky at one go — 40 times the angular size of the full moon — LSST will survey the entire night sky every two weeks. This visualization, featured in the documentary Seeing the Beginning of Time, gives us a virtual peek inside the LSST enclosure.
Read more 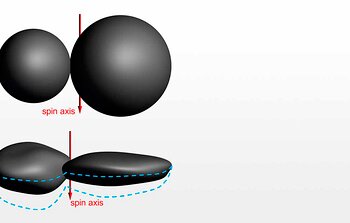 noaoann19004 — Announcement
The Truly Odd Shape of Ultima Thule
11 February 2019: New Horizon’s departing view of Ultima Thule, caught as the spacecraft raced away at 31,000 mph, shows that the Kuiper Belt Object’s shape is actually quite odd. Rather than the “snowman” shape initially reported, it more closely resembles a giant pancake (Ultima) stuck to a dented walnut (Thule). The revelation came from “tracing out" the unlit side of Ultima Thule as it blocked the view to background stars (see animation). NOAO Astronomer Tod Lauer played a critical role in the investigation.
Read more 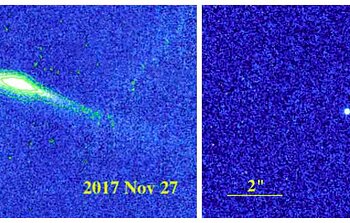 noaoann19003 — Announcement
Shape-Shifting Asteroid with a Comet-like Tail
31 January 2019: Active asteroids blur the distinction between asteroids and comets. Like other asteroids, they orbit the Sun in a belt between Mars and Jupiter. But they can also “shape shift," unfurling spectacular comet-like tails, then packing them away again. Observations of P/2017 S5 made with the WIYN telescope identify it as a water-bearing active asteroid and a step toward understanding the origin of water on Earth. The study was carried out by a team led by D. Jewitt (UCLA) that includes NOAO astronomers Jayadev Rajagopal, Susan Ridgway, and Wilson Liu.
Read more 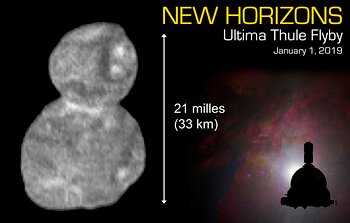 noaoann19002 — Announcement
New Horizons Explores Ultima Thul
5 January 2019: The first detailed images of the most distant object ever explored reveal the Kuiper Belt object Ultima Thule to be a “contact binary” consisting of two connected spheres: “Ultima” the larger sphere and “Thule” the smaller. In making the discovery, New Horizons set a new bar for spacecraft navigation — never before has a spacecraft tracked down such a small body at such high speed so far away. NOAO Astronomer Tod Lauer played a critical role in the achievement.
Read more

noaoann19001 — Announcement
Mayall Telescope Receives New “Top End”
2 January 2019: In preparation for its new mission as the home of the Dark Energy Spectroscopic Instrument (DESI), the Kitt Peak Mayall telescope recently received its new top end, a 10 ton steel-framed structure that includes the new corrector barrel—a stacked array of large delicate lenses that creates a wide field-of-view—and will eventually house the 5000 robot fiber-positioners that will be used to capture the light from millions of galaxies and quasars. DESI will create the largest 3-D map of the cosmos to date and probe the role of dark energy in the expansion history of the Universe.
Read more 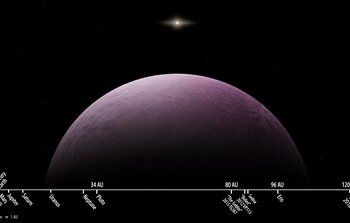 noaoann18024 — Announcement
“Far Out” Dwarf Planet Discovered
14 December 2018: Astronomers have announced the discovery of the most distant body ever observed in our Solar System. Nicknamed “Farout” for its extremely distant location, the new dwarf planet 2018 VG18 is 120 times further from the Sun than Earth (i.e., at 120 AU). In comparison, the dwarf planet Eris is at 96 AU and Pluto is currently at 34 AU. The discovery was made by astronomers Scott Sheppard, David Tholen, and Chad Trujillo as part of a survey of the outer Solar System carried out in part with observing time made available through NOAO.
Read more

noaoann18023 — Announcement
One Cool Camera
3 December 2018: Work on the camera for the Large Synoptic Survey Telescope (LSST), bound for Cerro Pachon in Chile, recently reached a major milestone with the completion of the camera’s refrigeration system (a.k.a. its cryostat). Equipped with 3.2 gigapixels, the camera is the largest ever built for ground-based astronomy. NOAO is a founding partner of LSST and is developing tools and systems to support community research with LSST.
Read more 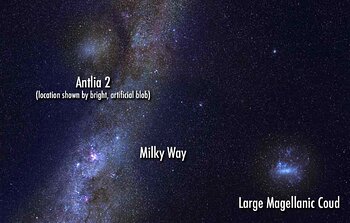 noaoann18022 — Announcement
Ghostly Backyard Giant Plays Hide-and-Seek
20 November 2018: Astronomers have discovered a large, extremely diffuse galaxy companion to the Milky Way. As big as the Large Magellanic Cloud but 10,000 times fainter, the galaxy has eluded us until now because of its faint, “ghostly” appearance and its hiding place behind the disk of the Milky Way. The discovery was made with the Gaia satellite and archival data from DECam on the CTIO Blanco telescope. Astronomers want to know: is this galaxy an oddball?...or one of many “ghostly” companions yet to be found? Long press or hover your mouse over the image above to view a labeled version.
Read more
Showing 1 to 20 of 352
Usage of NOIRLab Images and Videos
Are you a journalist? Subscribe to the NOIRLab Media Newsletter.