Vera C. Rubin Observatory’s Commissioning Camera (ComCam) has been successfully installed on the Telescope Mount Assembly on the summit of Cerro Pachón in Chile. This is the first of many optical components to be integrated with the telescope structure, and is an important step toward getting real astronomical data flowing from the observatory.

ComCam is a smaller (144-megapixel) and simpler version of the full 3200-megapixel LSST Camera. ComCam will be used for testing and commissioning activities prior to the installation of the full science camera and it will produce the first astronomical data from the Simonyi Survey Telescope once the rest of the optical system is installed. This commissioning data will be used to demonstrate that the various subsystems of the telescope are working as designed. The Rubin Operations team plans to release commissioning data as part of Data Preview 1, scheduled for mid-2024.

The Rubin team on the summit has been rehearsing for this installation for many months using the camera surrogate mass, a steel structure that approximates the mass of the LSST Camera (and ComCam) Assembly. The practice lifts have allowed the team to fine-tune the lifting, installation, and removal procedures before using them to install the real cameras with their delicate electronics.

Last week, immediately following the final practice installation-removal run with the camera surrogate mass, the summit team moved it down to the staging area on the 3rd floor of the observatory facility using the vertical platform lift. There, the team exchanged the camera surrogate mass with the Camera Assembly (the structure containing ComCam), which was then brought up to the 8th floor and put into position next to the telescope. The team mounted the custom-built camera lifting fixture on the Camera Assembly and then carefully balanced the entire structure to ensure a level and smooth insertion into the telescope. Over the course of a couple of hours, the Camera Assembly was lifted and slid into position on specially designed tracks, and then bolted into its final position in the center of the telescope.

Now that ComCam is in place and fully integrated with the telescope mount, the summit team will repeat the tests that were previously done in the 3rd floor integration hall before ComCam was moved up to the telescope floor. These tests include making sure ComCam functions in coordination with the camera hexapod, rotator, camera cable wrap, and the support systems for the two mirrors. After verifying that ComCam is behaving as expected, the team will perform additional tests using the full feature sets of the telescope mount and the dome.

Like the camera surrogate mass before it, ComCam will be removed and reinstalled on the Telescope Mount Assembly at least one more time after this initial integration — but in this case it's out of necessity, not for practice. When it's time to install the coated Secondary Mirror (M2) and its support system toward the end of 2022, engineers will need to remove ComCam for several weeks and then reinstall it. This is because the ComCam structure fits into the center of M2. Once M2 is successfully integrated, ComCam can go back on the Telescope Mount Assembly. After that, the team will install the M1M3 mirror and support system — the last component necessary for ComCam to take its first on-sky observations, which are expected in mid-2023.

Rubin Observatory is a joint initiative of the National Science Foundation and the Department of Energy (DOE). Once completed, Rubin will be operated jointly by NSF’s NOIRLab and DOE's SLAC National Accelerator Laboratory to carry out the Legacy Survey of Space and Time.

Rubin Observatory is a joint initiative of the National Science Foundation (NSF) and the Department of Energy (DOE). Its primary mission is to carry out the Legacy Survey of Space and Time, providing an unprecedented data set for scientific research supported by both agencies. Rubin is operated jointly by NSF’s NOIRLab and SLAC National Accelerator Laboratory (SLAC). NOIRLab is managed for NSF by the Association of Universities for Research in Astronomy (AURA) and SLAC is operated for DOE by Stanford University. 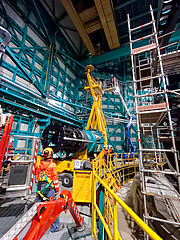