Explore the Universe with NSF’s NOIRLab

From our planetary neighbors to the edge of the observable Universe, NOIRLab’s latest brochures and booklets share the excitement of discovery

The Universe awaits! From the outskirts of our own Solar System to infant stars and galaxies at the other end of the observable Universe, astronomers are uncovering previously hidden wonders. Making this new era of exploration possible are the state-of-the-art nighttime optical observatories funded by the US National Science Foundation (NSF), which are brought together for the first time in one unified organization, NSF’s NOIRLab.

To help astronomers, educators, and the public share in this journey of discovery, NOIRLab has released a series of informative and engaging brochures and handouts — in English and Spanish — that are brimming with stunning images of advanced telescopes and the distant objects they observe. These exciting products are available to download from the NOIRLab website and hard copies are available upon request for use in schools, science festivals, and other astronomy-themed outreach activities.

Leading the way is NOIRLab’s flagship booklet titled Discovering Our Universe Together. This collection of evocative images and stories of discovery covers astronomy’s new golden age in which powerful telescopes outfitted with incredibly sensitive instruments are quickening the pace of scientific research. These telescopes are located on high mountaintops in some of the most extreme environments in the world, including Maunakea in Hawai‘i and the rugged terrains on the edge of Chile’s Andes Mountains. Readers will also learn about the future of ground-based astronomy, including the soon-to-be-complete Vera C. Rubin Observatory. English- and Spanish-language tri-fold summaries of this booklet are available as well. New versions of the AURA brochure and the Gemini Capabilities brochure have also been published.

NOIRLab is also looking to the future with glossy brochures about two new telescope projects — the Giant Magellan Telescope and the Thirty Meter Telescope (TMT) — which together form the US Extremely Large Telescope Program (US-ELTP), ranked as the highest ground-based priority by the community in the Decadal Survey on Astronomy and Astrophysics 2020 report of the National Academies.

With higher resolution than any telescope on Earth or in space, scientists anywhere in the US will be able to use the US-ELTP system to observe objects anywhere in the sky and carry out transformational research on topics ranging from the search for life outside the Solar System to the nature of dark matter and dark energy. With their complementary designs and a diverse set of instruments, the two next-generation telescopes will offer great synergy with other facilities in space and on the ground.

To follow along on this journey and learn more about the other brochures, booklets, and other exciting educational products available from NOIRLab, visit our website. 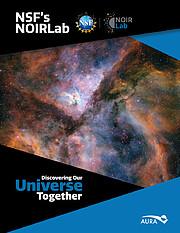