A unique fulldome planetarium show starring the international Gemini Observatory, a program of NSF’s NOIRLab, has been released today. Produced by Kwon O Chul, a world-renowned astrophotographer from South Korea, Gemini Observatory and the Southern Sky takes the viewer on a journey from sunset to sunrise through the zodiacal light, the Milky Way, several constellations, galaxies, nebulae, and meteor showers. The show was shot from Cerro Pachón in Chile, home to the 8.1-meter Gemini South telescope.

Kwon’s goal is to help people feel the wonder of the night sky, and he creates planetarium shows using real imagery for backgrounds, which he shoots during his astrophotography travels. Most planetarium shows today, even those featuring real objects and locations, largely rely on computer-generated images and renders for the final product.

Kwon made one of the first virtual reality videos of the aurora borealis, also known as the northern lights, and his second show Cosmos Odyssey was about the history of astronomy. For that project, Kwon visited world famous observatories including Gemini Observatory.

This year, major distributors of planetarium content will start distributing Gemini Observatory and the Southern Sky. A 3-minute, free excerpt of some of the exceptional footage is available in 8k resolution on the NOIRLab website.

NSF’s NOIRLab (National Optical-Infrared Astronomy Research Laboratory), the US center for ground-based optical-infrared astronomy, operates the international Gemini Observatory (a facility of NSF, NRC–Canada, ANID–Chile, MCTIC–Brazil, MINCyT–Argentina, and KASI–Republic of Korea), Kitt Peak National Observatory (KPNO), Cerro Tololo Inter-American Observatory (CTIO), the Community Science and Data Center (CSDC), and Vera C. Rubin Observatory (in cooperation with DOE’s SLAC National Accelerator Laboratory). It is managed by the Association of Universities for Research in Astronomy (AURA) under a cooperative agreement with NSF and is headquartered in Tucson, Arizona. The astronomical community is honored to have the opportunity to conduct astronomical research on Iolkam Du’ag (Kitt Peak) in Arizona, on Maunakea in Hawai‘i, and on Cerro Tololo and Cerro Pachón in Chile. We recognize and acknowledge the very significant cultural role and reverence that these sites have to the Tohono O'odham Nation, to the Native Hawaiian community, and to the local communities in Chile, respectively. 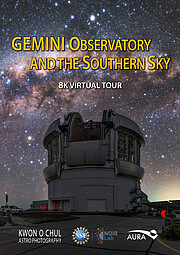 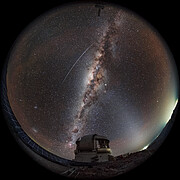 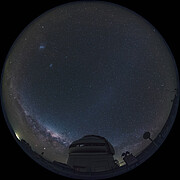