On 12 and 13 March 2022, NSF’s NOIRLab made its debut at the annual Tucson Festival of Books, sharing fun astronomy activities and talking about NOIRLab’s Programs and roughly 70 world-class telescopes with hundreds of curious members of the public. This was the first large-scale, face-to-face event at NOIRLab’s Arizona facilities since the start of the COVID-19 pandemic.

NOIRLab set up its display and activities next to its Headquarters building on Cherry Avenue in Tucson, Arizona, which was a highly trafficked area as people walked to the festival on the University of Arizona campus. NOIRLab staff provided safe solar viewing through telescopes, melted pennies with sunlight using a large Fresnel lens, provided stickers, brochures, and other giveaways, and introduced a new NOIRLab cube game.

“The Tucson Festival of Books was a great opportunity to engage with the public and introduce NOIRLab to the local community and to those visiting the festival from out of town,” said NOIRLab Director Patrick McCarthy.

First held in March 2009, the Tucson Festival of Books attracted over 130,000 visitors per year before the COVID-19 pandemic. It returned in person this year after being canceled in 2020 and hosted virtually in 2021 because of the pandemic. The National Optical Astronomy Observatory (NOAO), which became part of NOIRLab, participated in the festival in past years, but this was the first opportunity for NOIRLab to interact with festival-goers since the organization was established in October 2019. 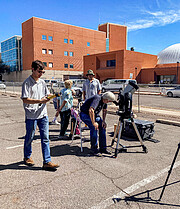 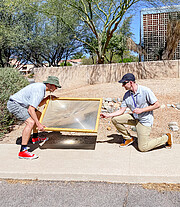