NSF’s NOIRLab is presenting about the importance of clear and dark skies at a virtual event named “Chilean Astronomy: A window to the Universe”, organized by the Chilean Embassy in Singapore in partnership with the Science Centre Singapore.

The four-day program highlights the astronomical infrastructures hosted by Chile, and includes the possibility of interacting with experts, such as representatives from astronomical societies and some of the biggest observatories in the world operating in Chile.

The topics of the event range from star hunting, light pollution, and inclusivity in astronomy, to the streaming of related documentaries like Big Astronomy: People, Places, Discoveries. Juan Seguel, Education & Engagement Specialist at NOIRLab, presented a talk called Astronomy and light pollution + Globe at Night Campaign where he described the Globe at Night project and addressed questions from the audience. 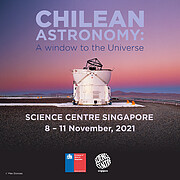 PR Image ann21043a
Promotional poster for “Chilean astronomy: A window to the Universe