Scientists working with the Dark Energy Camera (DECam), on the Víctor M. Blanco 4-meter Telescope at the Cerro-Tololo Inter-American Observatory (CTIO), a Program of NSF's NOIRLab and located in the Coquimbo Region of northern Chile, are celebrating a major milestone: the instrument has taken its one-millionth exposure.

One of the most powerful digital cameras in the world, the Dark Energy Camera was designed specifically for the Dark Energy Survey. It was funded by the Department of Energy (DOE) and was built and tested at DOE's Fermilab.

This milestone came while performing observations as part of the DECam eROSITA Survey. This visible-light survey is designed to follow up on targets observed in X-rays by the eROSITA X-ray instrument, which sits aboard the Russian–German Spectrum–Roentgen-Gamma (Spektr-RG) mission, an observatory that launched in 2019 to map the cosmos. At the time of this exposure DECam was making an observation of a galaxy cluster filled with hot, X-ray-emitting gas.

The DECam eROSITA Survey is being led by José Luis Nilo Castellón of the University of La Serena in Chile and by NOIRLab astronomer Alfredo Zenteno, who, working remotely from his home in Chile, was the chief observer when the image was taken.

“At the mountain, [Cerro Tololo], Hernan Tirado, Fernando Cortez, and Alberto Alvarez were the observer support and telescope operators at the moment of the observation,” said Kathy Vivas, an Associate Astronomer at CTIO and a member of the support team for DECam.

DECam is a high-performance, 570-megapixel, wide-field camera that was initially designed to work on the Dark Energy Survey. This survey ran between 2013 and 2019, imaging 300 million galaxies in order to better understand the properties of dark energy, the mysterious force causing the expansion of the Universe to accelerate. Since DES ended, DECam has been made available for use by the astronomical community at large. After an initial proprietary period (typically 18 months), all DECam images are available through NOIRLab's Astro Data Archive at the Community Science and Data Center (CSDC).

DECam’s million exposures include science observations as well as test and calibration exposures taken by the camera while it was being fine-tuned after its construction and installation on the Blanco telescope in 2012.

“To reach #1,000,000 is a milestone and a good opportunity to celebrate this wonderful instrument and look forward to the next million,” said Vivas. 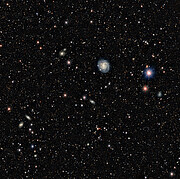